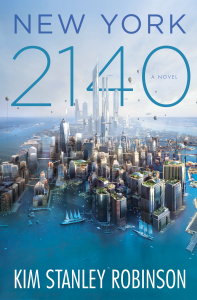 One of the aspects of Kim Stanley Robinson’s work I’ve always admired is its inherent optimism: the fact that his characters, despite the many intractable problems facing them, ultimately apply common sense and expertise and an inspiring fighting spirit to the challenging times they live in. Since Robinson’s worlds are often futuristic reflections of our own, there’s something hopeful about them even when the speculation is dire and the message is scathingly critical. His optimism may, in fact, slip a little in New York 2140 (2017), another fiercely political, cautionary science fiction novel that extrapolates on a future of runaway climate change. Justifiable cynicism and anger infuses its complicated, bracing story, but in a way that only makes it more powerful, and ultimately Robinson’s characters still come through to deliver a certain hope for the future.

The Manhattan of New York 2140 is half-drowned. Global warming and the melting of polar ice has risen the Earth’s sea level fifty feet, which inundated coastal cities during a First and Second Pulse that threw the Earth into turmoil. Even so, New York remains a thriving place, adapting to its grim new circumstances with tough, fuck-you stoicism. New technologies have morphed parts of lower Manhattan into a new “SuperVenice,” where the bulk of the novel plays out, revolving around the lives of the many denizens of one Madison Square building. The odd disappearance of two residents under suspicious circumstances kicks things off, ultimately bringing together several important personages in the building: a hard-nosed police inspector, the ultra-competent leader of the housing board, a building manager who is haunted by tragedy, a douche-y trader, two adventurous “water rat” boys, and the efferverscent internet sensation who tethers her airship to the top of the building. Their various stories proceed independently, but ultimately spin together into a complex tale of worlwide upheaval and revolution.

New York 2140 paints a fascinating picture, hopeful and grim in equal parts, of a world wracked by drastic, earth-shattering change. In some ways, it feels like a thematic sequel to Robinson’s Green Earth trilogy, which focused heavily on the thorny intersection of climate change and politics. But this one takes the debate a step further, diagnosing a cause for much of our troubles: runaway capitalism. The field of economics looms large, and the novel takes a surprising interest in finance and real estate, examining how the recklessness of those industries contribute to the world’s ills. If this makes the novel’s politics all the more leftward-leaning, well that just makes me like it all the more. But there’s also compelling human drama, conveyed through a robust cast of accessible, well defined characters.

Robinson continues to be one of science fiction’s most entertaining writers and forward-thinking visionaries, and New York 2140 contributes greatly to the reputation as a master of the genre.

New Review in the January 2018 Lightspeed