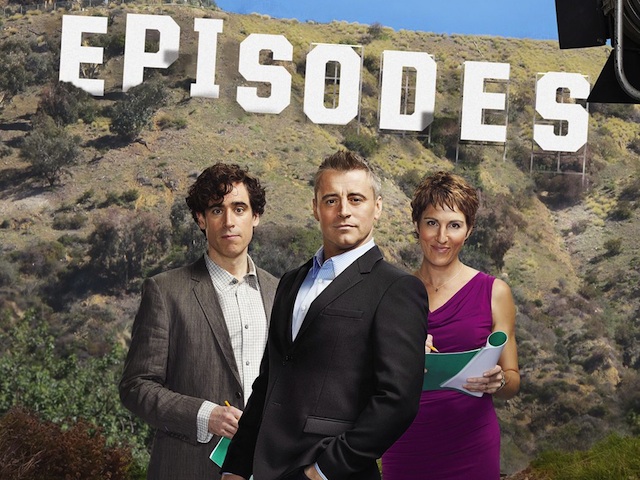 There’s a scene towards the end of Episodes (2011-2017) wherein a vain, arrogant actor argues vehemently with his dysfunctional British writer friends that “there’s love here! this is love!” even as they’re screaming at each other after months of fractious coexistence on the set of a miserable Hollywood sitcom. It strikes me that this scene explains my brief, binge-watching obsession with the bracing, funny, problematic comedy of Episodes. Hollywood may be a horrific shitshow, but a sick, sad part of me — the part that ineffectually chased screenwriting on two separate occasions — still craves success in the shitshow. There’s “love” there. Whoops!

Episodes’ beleaguered protagonists are Beverly and Sean Lincoln (the winning Tamsin Greig and Stephen Mangan), hotshot TV writers in the small pond of the British entertainment industry. After winning their latest award, they’re approached by glad-handing Hollywood producer Merc Lapidis (John Pankow), who loves their hit show Lyman’s Boys so enthusiastically that he offers to produce an American version. Beverly is skeptical, but Sean is so enamored of the idea that they take a leap of faith, flying overseas to make the pilot. When they arrive, however, they learn that not only has Merc never seen the show, but the network has no intention of staying true to to the spirit of it. In fact, the actor rammed down their throat — to play a charming, elderly British headmaster, no less — is former Friends superstar Matt LeBlanc (LeBlanc, satirizing himself with abandon).

For anyone who’s even scuttled around the fringes of Hollywood, Episodes strikes amusingly close to the mark; there’s a certain truthiness to its absurd heightened reality. And the show, especially in the early seasons, works very well as an awkward, cringey blend of British and American sensibilities — both behind the camera and in front of it. It has the short seasons, biting wit, and farcical antics of something that might have originated on the BBC, but mutates it with over-the-top American crassness and cable channel permissiveness, a tonal clash that mirrors the onscreen conflict. All of this lends the show a delightfully meta flavor, only enhanced by LeBlanc’s trashy, deplorable performance as something of a chaotic-evil alter ego. (Or so I should hope!)

Episodes also skates along, for a while, on brilliant comedic performances that bring charisma to deeply flawed, and in some cases repulsive, characters. LeBlanc’s preternatural puppy-dog charm makes him just likable enough to occasionally forget how truly terrible his character is behaving — helped, perhaps, by the fact that he’s often in opposition to Hollywood powers just as awful as he is. (If you’re familiar with Extras, you’ll recall how much mileage that show got out of its demented celebrity cameos. Episodes basically extends the joke to extremes in its depiction of LeBlanc.)  But even more crucial, perhaps, are Greig and Mangan, who are ordinary creative people whose relationship is nearly destroyed by their experience. They are the “straight” viewpoint against which all the chaos revolves, and make for charming, accessible windows onto this world. Solid support comes from everyone in the cast, including regulars Pankow and Mircea Monroe, but the true stand-out is Kathleen Rose Perkins as Carol, the network head of programming who becomes Beverly’s best friend — well, sort of. Carol has her own complex personality issues to deal with, and is every bit as symptomatic of the moral-warping impact of show business, but Perkins makes the character accessible, delivering a hilarious, sustained master class in comic acting throughout the show’s run.

For all its strengths, Episodes has troubling blind spots. It is staggeringly homogenous, racially, which might have been commentary on a white-dominated industry…but I’m not sure, based on certain misfiring jokes, that the writers are quite that self-aware. In the interest of satirizing the awfulness of Hollywood and the absurdity of wealth and celebrity, Episodes edges up to the line often, occasionally crossing it into offensiveness. This seems more frequent in the latter, less well structured seasons, when the churn of production forces the writers to reach rather farther than comfortable for new material. And ultimately, the final episode lands in a rather predictable place, a good two seasons or so after the shine has vacated the apple.

Any recommendation, therefore, comes with caveats. But Episodes has its moments. It’s energetic and at times addictive, delivering an entertainingly dysfunctional created family, and the skillful comic performances of LeBlanc, Greig, Mangan, and Perkins make this one worth watching, provided you can forgive its rougher edges.

Film: A Boy and His Dog

Collection: Attack of the Jazz Giants and Other Stories by Gregory Frost