Collection: Attack of the Jazz Giants and Other Stories by Gregory Frost 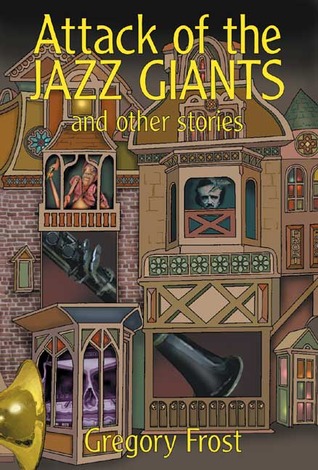 Gregory Frost is tricky writer to pin down, a restless, versatile talent whose output varies significantly from story to story. I have to think this explains why it took me a while to progress through his Golden Gryphon anthology Attack of the Jazz Giants and Other Stories (2005). It certainly has nothing to do with the quality of the prose or the effectiveness of the stories. His short fiction output is diverse and surprising, leaping from genre to genre in unpredictable fashion.

“The Girlfriends of Dorian Gray” opens the collection, a creepy, Twilight Zonesque tale about a casually vile man who enchants his fiancés to convert them into vessels for his appetite. It’s a well-chosen lead-off hitter, simultaneously exemplifying Frost’s quirky sense of humor and eloquent language. For me, the collection really kicks into gear with the second story, “Madonna of the Maquiladora.” This is the story that lured me to Frost’s work, an angry, heartfelt near-future tale of a photographer investigating sweatshop factories along the Texas-Mexico border, wherein something mysterious is going on. Written in an uncommonly adroit second-person, “Madonna” is a challenging, memorable tale that provides a strong glimpse of the compassion underlying Frost’s voice.

The collection continues in this highly empathetic vein in the next two stories. “Collecting Dust” is a compelling allegory about the disintegration of the modern nuclear family, an exquisitely rendered example of the literalized metaphor story. “The Bus,” meanwhile, calls out American inequality in a horrific tale of a homeless derelict who gets a brief respite from his struggles when a wealthy casino bus rolls into his neighborhood to welcome him aboard. It’s dark and unsettling horror and it’s probably more relevant now than when it was written.

From here, the collection starts to lurch wildly across the genre map, showcasing Frost’s inventiveness and versatility. Because of the wide variety of ideas, styles, and approaches, I found myself distanced from some stories, but thoroughly immersed in others. Regardless, there’s impressive range here, and a fruitful imagination is ever on display. “Divertimento,” for example, didn’t entirely compel me narratively, but presents a memorable, wicked-cool scenario in which “time bombs” rupture reality and enable people to peer through windows into the past. “A Day in the Life of Justin Argento Morrel” playfully but fiercely subverts the cliches of classic hard SF, while “Some Things Are Better Left” serves up a bracing, funny class reunion story about, well, a blood-draining ritualist. I also quite enjoyed “From Hell Again,” a vivid Jack the Ripper riff about a river dredger who’s embroiled in the story of the notorious killer. The collection closes with a personal favorite, the rousing “How Meersh the Bedeviler Lost His Toes,” a wildly creative and entertaining fantasy about a trickster character who gets in over his head when a buxom neighbor recruits him to babysit her demonic children. It caps off an impressive volume from an articulate, crafty, and unique author.