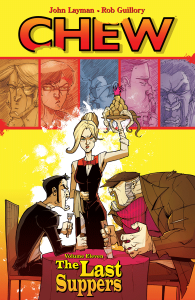 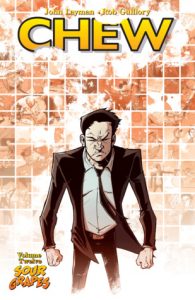 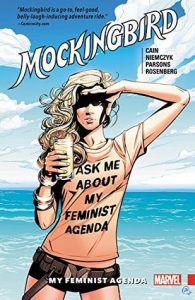 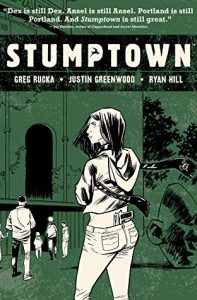 I’ve definitely dialed back my comic-book habit over the past few years — two moves made me painfully aware of how damn heavy they can be — but recently I had the urge to dip my toes back in, finishing off a few graphic novels that had been languishing on my to-read shelf.

First up, I finally finished off John Layman and Rob Guillory’s epic twelve-volume series Chew with its final two volumes, The Last Suppers and Sour Grapes. Hilariously disgusting, disgustingly hilarious, Chew is a singularly zany and inventive series about cibopathic detective Tony Chu, who solves crimes by eating the evidence. The final two volumes wrap up the saga, settling Tony’s rivalry with fellow cibopath Mason Savoy, saying goodbye to his relationships, and finally explaining the mysterious avian flu that transformed the Chew universe. It’s a satisfying conclusion to the series that I think would have been more satisfying if I’d simply read them all closer together. That said, I’ll definitely miss Layman’s bonkers storylines and Guillory’s imaginative artwork in this series.

Chelsea Cain and Kate Niemczyk’s run on Mockingbird concludes with its second volume, My Feminist Agenda. It’s a real shame this series didn’t continue because it was just starting to come into its own. Alas, there are only three issues in this highly amusing tale, which involves Bobbi accepting an invitation to a Hawkeye fandom cruise in the Caribbean — right after he goes on trial for murdering Bruce Banner. Unconventional, colorful, and funny, My Feminist Agenda sends the title out on a high note, and earns bonus points for slyly dragging old West Coast Avengers lore into the twenty-first century.

Finally, I caught up on the third volume of Greg Rucka’s Stumptown comic, his noirish Rockford Files homage about hard-nosed PI Dex Parrios. “The Case of the King of Clubs” weaves Portland’s robust soccer culture into its storyline, as Dex and a rival Seattle PI named CK investigate the beating of a friend after a Timbers match. Rucka is a skillful, compelling comic writer, and Stumptown is a vivid creation that screams to made into a TV show. Now that I’m living in Portland, I probably ought to go back and re-read the first two volumes — I suspect I missed a lot of in-jokes the first time around. Great stuff in this batch!