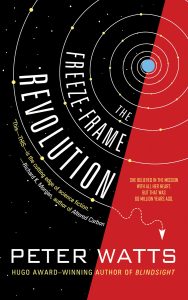 Far-future science fiction is a tough sell for me. Done poorly, it can feel phony; done well, it can be impenetrably alien. Peter Watts’ new novel The Freeze-Frame Revolution (2018) straddles the line perfectly, a dazzling blend of brain-twisting sense of wonder that never loses sight of its narrative accessibility. The first-person protagonist, Sunday, is one of many “spores” on a planetoid ship hurling through the galaxy. Its mission: building wormhole gates to enable humanity’s conquest of the stars. The spores are human crew members who forever labor in service to “the Chimp,” a limited artificial intelligence that wakes them from cold sleep periodically to carry out the mission’s trickier, more nuanced tasks. Thousands of years pass in between their brief fits of consciousness. Sunday lives for the mission, but her worldview is challenged when a close friend expresses discontent with their slavish plight. There are spores, as it turns out, who want liberation from their cosmic servitude, and despite her reluctance, Sunday spirals ever closer toward their revolutionary plans.

The Freeze-Frame Revolution is an occasionally challenging read, but also a gripping, mind-expanding one. Somehow it manages to attach a brisk plot to a revolution that takes place over the course of millennia. Watts’ upbeat, neologism-heavy style manages to convey the impression of an unknowably weird future, while also serving as a vivid window onto it. The blend of big ideas, well rendered characters, eye-popping setting, and engrossing plot makes for a very satisfying read. I’m having a hard time figuring out how Watts’ work has flown under my radar until now.