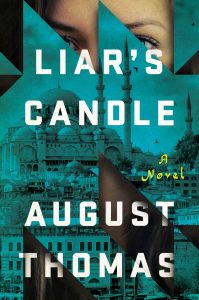 With Liar’s Candle (2018), August Thomas makes a promising spy thriller debut. As it opens, Penny Kessler — a young intern for the State Department in Ankara, Turkey — awakens in a hospital bed, having survived a devastating terrorist bombing on the U.S. Embassy there. Much to her surprise, in the aftermath she becomes the subject of a media frenzy, hounded by government handlers on one side and Turkish politicians on the other. It soon becomes clear, however, that neither side has her best interests at heart. Everyone seems to think she’s an operative of the CIA, and when she narrowly survives an assassination attempt, she realizes someone’s trying to take her out of the picture. But why? Escaping enemy clutches with the assistance of a rookie CIA agent named Connor, Penny sets out to get to the bottom of the conspiracy.

Liar’s Candle is a fast read with accessible prose, likable characters, and refreshing elements that set it apart from the usual spy thriller fare. Most notably, Penny lacks the usual jaded, cynical eye of the spy fiction protagonist, a naive but resourceful young woman who’s in over her head, but up to the challenge. She and Connor are unusually sympathetic heroes at the center of a labyrinth of conflicting, devious motives. The plot is well conceived, clipping along briskly, and while occasionally the action-adventure mechanics of the story don’t play out quite as believably as the espionage intrigue, the memorable backdrop and nicely paced twists and turns of the story make up for it. Overall, it’s an energetic, enjoyable debut.