Novel: The Middleman by Olen Steinhauer 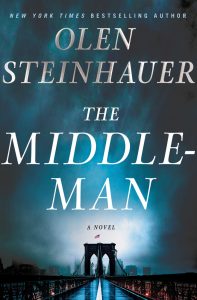 In my experience, spy novelist Olen Steinhauer has yet to put a foot wrong. But during the early chapters of his latest novel The Middleman (2018), I started to wonder if his hot streak had come to an end. A contemporary conspiracy thriller focused explicitly on the current quagmire of American politics, this one gets off to rocky start before ultimately redeeming itself in its second half.

It posits the emergence of a new left-wing political movement in the United States known as the Massive Brigade, a disparate collection of anti-capitalists and social justice activists who come together under the leadership of charismatic founder Martin Bishop and his prickly lieutenant Benjamin Mittag. While largely an organization of ideas, the Massive Brigade is definitely on the radar of America’s spy agencies, who fear their potential for terrorist activity. Sure enough, when Bishop and Mittag are connected to a weapons cache, the two men quickly go underground to elude capture. Oddly, however, they take hundreds of their followers with them: a spontaneous mass exodus of left-wing radicals who go completely off the grid, motives unknown. Determined to crack the case is FBI Special Agent Rachel Proulx, who quickly sets about tracking down the Brigade, concerned it may be on the verge of a major operation. But when her investigation goes catastrophically sideways, Proulx finds herself on the wrong side of a major international conspiracy.

Like all of Steinhauer’s work, The Middleman is a blazingly fast read with a complex plot rife with intricacy and depth. The first third of the book, however, reads a little like an underwhelming airport technothriller: a multi-protagonist sprawl of loosely connected characters who get embroiled in a highly public political controversy. Its sociopolitical backdrop reflects the deafening noise of our chaotic reality, and it’s perhaps a bit heavy-handed. Though never explicitly named, the story is fueled by the rise of Trumpism, the #MeToo movement, and Black Lives Matter, among other things — real-world references that at times butt up awkwardly against the novel’s fictional world-building flourishes. This section reads like polemic, and even though it’s polemic with which I sympathized, it came across a bit strident.

Fortunately, the novel finds its footing in subsequent sections, morphing from something mundane into a more genuine, twisty Steinhauer narrative. The shift occurs when the novel reigns in its focus, redirecting from a wide-angle view of things to the more close-in viewpoints of its outsider heroes, especially Rachel Proulx — a first-rate protagonist whose “screen-time” increases substantially down the stretch. If the opening section lays out the novel’s core mystery in an expected, familiar way, the rest of the novel ramps up Steinhauer’s particular mode of intrigue as Rachel and her allies work together to uncover the truth behind the Massive Brigade affair. The plot gains layers, the characters achieve more depth, and the political themes are handled more sure-handedly. Ultimately, the novel lands at a satisfying conclusion, and ends up a worthy addition to the author’s body of work. It may not be the smoothest journey, but overall it’s a bracing read that engages in ambitious, unflinching dialogue with our troubled times.