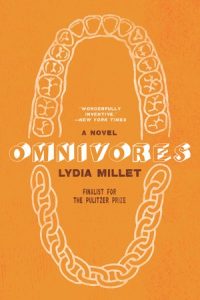 Lydia Millet’s debut novel, Omnivores (1996), came out quite some time ago, but I’m glad I’m reading it now; twenty-odd years of life in a toxic patriarchy has increased my appreciation of its themes. The novel follows the unfortunate life of Estée, the beautiful, bright teenaged daughter of an eccentric, wealthy recluse named Bill Kraft. Well, actually Bill isn’t so much quirky as stark raving bonkers, a mental state that influences his disturbing, abusive parenting. Her invalid mother Betty is no help — indeed, Betty’s another victim — so Estée is left to her own devices as she awaits her eighteenth birthday and independence. Unfortunately, even when she does get clear of her family, she’s in for rude awakenings as she tries to make a life for herself.

Omnivores is utterly scathing satire, deconstructing the systemic cruelty of horrible men through the eyes of an intelligent, sympathetic protagonist. For a first novel, it’s uncommonly fierce and confident, dark, inventive, painfully funny, and sickly infuriating. The voice is more raw than Millet’s later work, but it’s thematically of a piece, a smart, angry takedown of conspicuous consumption, capitalism, environmental recklessness, and most especially cavalier, ugly male power. Like many of Millet’s novels, it walks a fine line, feeling utterly contemporary and mainstream even as it ventures into fantastical absurdism. Fans of Millet’s other novels will find plenty to recommend it, then, and newcomers may well find it a gateway book to her unique voice. More solid evidence of why she’s one of my favorite writers.