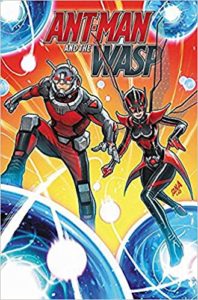 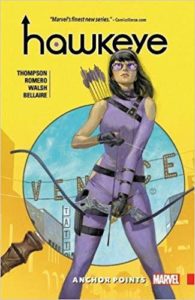 The glut of superhero content in movies and TV has diminished my bandwidth for comic books lately, but I still dip my toes in now and then. My most recent batch of books turned up some solid, entertaining stuff.

From Marvel, I finally caught up with the (rightly) lauded miniseries The Vision, written by Tom King and illustrated by Gabriel Hernandez Walta. Requiring limited knowledge of Marvel lore, this intelligent, attractive two-volume sequence follows the attempts of the Avengers’ intrepid android superhero to attempts to build a normal life for himself and his artificial family in Virginia. Things, of course, go disastrously wrong. It’s a thoughtful, beautiful, and chilling story of what it means to be different in an intolerant world. For readers seeking a standalone story in the Marvel universe, I highly recommend this one.

I took a flyer on Ant-Man and the Wasp: Lost and Found based on my admiration for Mark Waid’s writing. This volume follows Scott Lang and Nadia Van Dyne into the bizarre microverse of “Subatomica,” and while the story is little more than silly, inventive fun, Javier Garrón’s artwork is exceptional.

Rounding out the Marvel fare this time is Hawkeye: Anchor Points, the first solo series for Kate Bishop. Matt Fraction’s Hawkeye series from a few years ago rekindled my fandom for Clint Barton, but it also introduced me to Kate, Clint’s plucky protege who moves to L.A. to become a private investigator. Kelly Thompson’s new series leans into this Rockford Files element of Kate’s journey, mixing her superhero adventures in with intriguing detective tales — and weaving her in with a winning created family. It’s a worthy, fun follow-up to Fraction’s series, and possibly a good primer for fans anticipating the Disney Channel’s forthcoming Hawkeye TV series. 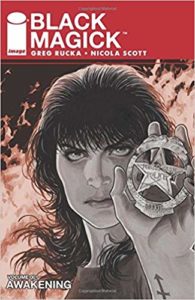 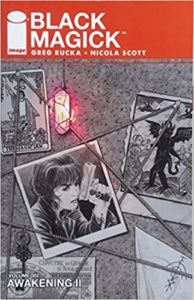 Moving on, I’m still keeping up with the output of Greg Rucka. I polished of the fourth volume of Stumptown (“The Case of the Cup of Joe”). It’s a generally entertaining continuation of the series, but I think one of the weaker plots; still, it whet my appetite for the upcoming TV versions featuring Cobie Smulders. More interesting, story-wise, is Black Magick, a tasty blend of police procedural and the supernatural about Rowan Black, a detective who is also a witch. I enjoyed the first volume a bit more thoroughly then the second, but both are gorgeously illustrated by Nicola Scott.

Then there’s Image Comics’ The Fix, a darkly funny, L.A.-set crime series from writer Nick Spencer and artist Steve Lieber. The Fix is edgy, violent, transgressive antihero fare with an unpredictable plot. With its sleazy subject matter and deplorable characters, The Fix might have been tough to admire but for Lieber’s hilarious artwork and the heroics of Pretzels the police dog.

Finally, there’s Archangel, a series with an enticing pedigree and premise: written by William Gibson, it mixes spy thrills with alternate realities in a story that involves the U.S. government’s attempt to open up and exploit a parallel universe. Unfortunately, while it has neat ideas and excellent artwork from Michael St. John Smith, the story is disappointingly incoherent. 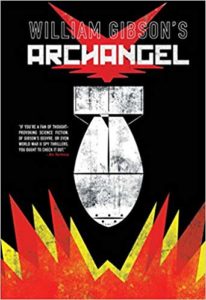