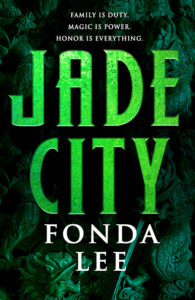 I’ve never read anything quite like Fonda Lee’s Jade City (2017), a lengthy but blazingly fast-paced novel that feels like a mash-up of epic fantasy, The Sopranos, 1970s martial arts films, and Avatar: The Last Airbender. Mash-up isn’t really the appropriate word, though; it implies incongruous ingredients, and the blend of disparate influences here is seamless. It makes for a gripping tale of magic, politics, and organized crime in a uniquely imagined secondary world.

The story takes place on the island nation of Kekon, in the city of Janloon, on a world not unlike Earth, say, forty years ago. There are cars and skyscrapers and technology and a history of global conflict. But there’s also magic, channeled from the jade that can only be mined on Kekon. Jade’s magical properties can be wielded by the Green Bones, who have organized into powerful clans that collaborate with government authorities to regulate the jade-mining industry — as well as directing most of the business is Janloon. Two rival clans dominate, and the majority of the novel’s protagonists hale from the smaller of the two, the No Peak clan. Lan is the even-handed leader trying to assert his authority, while his brother Hilo is the volatile “Horn,” the leading soldier who controls the clan’s street armies. Then there’s Shae, the thoughtful black sheep sister who fled her assumed destiny as a Green Bone to marry a foreigner and pursue an education overseas. Shae’s return to the fold is timely, however; her resourcefulness will be needed when a series of wild circumstances thrust No Peak into conflict with its chief rival, the powerful Mountain clan. The No Peak and Mountain clans are executing subtle political moves against each other to solidify their power, but a fly in the ointment disrupts their precarious detente. The resulting chaos lands Lan, Hilo, and Shae on center stage in an explosive clan war that could well reshape the nation.

Jade City is one of those hefty novels that at first glance looks like it must be too long, but what immediately impressed me about it was how surprisingly efficient it is. Lee eases the reader into the story by well-clocked degrees, establishing a massive, well defined roster of characters, a rich world, and a complex tapestry of geopolitics, all at just the right pace to prevent any confusion. As the plot twists and turns pile up, the pace accelerates addictively in a breathless rush of action, intrigue and magical sense of wonder. This one practically reads itself, a uniquely immersive experience with memorable characters, high stakes, and richly imagined world-building. I’m greatly looking forward to more of the saga.

New Review in the September 2019 Lightspeed