Another year in the books! (Exclamation point added, signaling enthusiasm!) Perhaps it’s just my subconscious desperately trying to break a pattern, but I’m heading into 2020 with a sense of wary optimism. Why? I’m not sure, exactly! We’re about to enter the third decade of the twenty-first century, and it’s fair to say the future I imagined as a starry-eyed teenager ended up being a lot more dismal and terrifying than I was expecting. I mean, did Devo have to be so right?

Still, there’s something about the way the wheels are flying off right now that’s sparked an ember of hope within me. In scary but perhaps necessary ways, 2019 lifted the veil. It was an epic, ongoing pants-drop on the facades of our American sociopolitical infrastructure. Neoliberal capitalism, the Republican party, climate science denialism, and on and on — so many ideas and institutions, revealed as frauds. That so many people have had to suffer for us to recognize the vast scope of our problems is a soul-crushing tragedy, but there’s something to be said for seeing them clearly. It’s not lost on me, by the way, that not seeing them clearly until now is a real sign of privilege; the rickety contraptions holding the western world together have been shaking a lot longer than many of us have been capable of noticing. But the more people see the need for change, the better the chance of collective action to stop a continued downward slide. A slim hope, perhaps? But it’s a hope that wasn’t even remotely there in the earliest stages of Trump presidency grief, so I’m trying to rally myself around it.

But this is an end-of-the-year post, which is supposed to be personal — or as personal as I ever get around here, which is fairly mitigated. But even this weird, truncated public version of myself can come out and say that some of my own, internal veils lifted this year. More and more, the preconceived notions I have about myself and my life — what I want, what I need, how I should be, what makes me happy — were challenged and shaped and refined in 2019. After all, many of those notions were unhealthy, if not toxic. But as fifty approaches, I’m seeing through more bullshit than ever, and it’s really helping me cope. I like to think it’s making me a better person, or at least a better version of myself. At worst, though, it’s made me someone striving to be better, and that’s not nothing.

Perhaps I’m just more upbeat than usual because I had a better writing year? To be honest, that doesn’t hurt, although oddly it was better externally than internally. It was an erratic year in terms of productivity and motivation. I managed just over 40,000 words of fiction, less than half of 2018’s output. Many months, I didn’t even lift a finger on fiction projects, which always leaves me feeling bummed out and restless. For all that, it was a good year for Lightspeed reviews (seven this year!) and the blog (110 posts!). I did lots of important, thinky work about new projects and career aspirations. I’m heading into the new year with two new novels in progress. And I sold two stories, which should both see print early in 2020. (Maybe it’s a coincidence, but both stories happen to be science fictional dialogues with my checkered emotional past, which fits in nicely with the theme of this post.)

This year may have been at its best when I got out of my head. This seems easier to do here in Portland than anywhere else, for me. I love this city, and all the wonderful people it has brought into my life. These days I even leave the house voluntarily, by myself, to socialize. (Who is this person?) I spoke on my first panel in over a decade, read my work out loud for an audience for the first time, went to numerous theater shows, and developed a shocking new enthusiasm for karaoke. (Seriously, sometimes I don’t even recognize myself.) I also gamed, went to work events, attended critique sessions and online hangouts, hit book events and writer’s socials, and got my bass chops back into shape. Travel was limited this year: a number of fun weekend visits to Seattle (which is starting to feel like a second home), a work trip to San Francisco, and — most memorably — a trip back to Fredonia for my thirtieth-annual high school reunion. I wasn’t sure what to expect with that last one, but ended up having a blast visiting with my my parents, connecting with old friends, and seeing my home town for this first time in years.

Don’t get me wrong, 2019 was far from perfect. The world is in rough shape, and I didn’t always do the best job of handling that. I battled depression, wrestled with annoying health issues, dealt with new stresses and frustrations at work, worried about money, and occasionally just looked on helplessly trying to get through each day. But I’m feeling recharged and ready to stay in the fight. Every year around this time, Jenn and I have a tradition of reflecting on the past year and discussing our hopes for the new one. This year we almost immediately landed on “more of the same, but better.” All things considered, I think this means we’re in a pretty good place. I suspect anyone reading this far into the post had a hand in making that happen, and for that I am so, so grateful. Hope everyone has a happy new year and I look forward to seeing you in 2020! 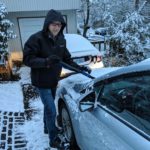 A snowy start to the year in Portland 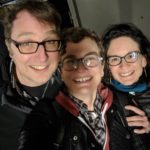 Out and about with Jenn and Tina 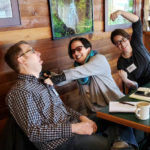 Sitting on a panel about critique groups with Fran and Kelly 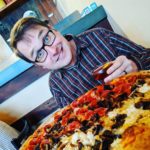 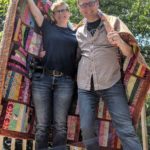 On the back deck with Jenn 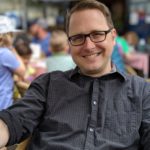 Chilling in the French Quarter in Multnomah Village 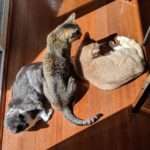 Oslo, Cairo, and Finley sunbathing in the kitchen 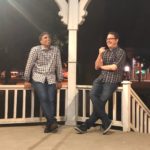 Three AM gazebo visit in Fredonia with Ravi 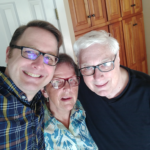 Selfie with Mom and Dad 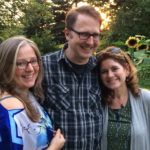 Catching up with Jennifer and Kelly in Fredonia 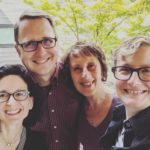 Brunch with Tina, Marcia, and Jenn on Jenn’s birthday 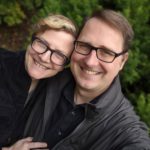 Selfie with Jenn in October 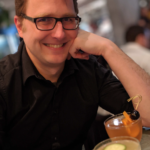 Cocktails with Jenn before the symphony 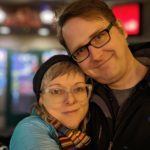 With Trace in Seattle 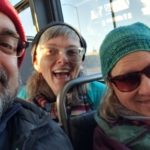 On the bus with Andy, Trace, and Carol in Seattle

“The Men Who Change the World” is Live at Lightspeed