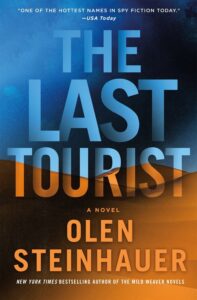 It’s been eight years since the final novel of Olen Steinhauer’s original Department of Tourism trilogy, featuring the author’s intrepid black ops agent Milo Weaver. After a handful of polished, interesting stand-alone works, Steinhauer returns to this world in force with The Last Tourist (2020), filling in the gap-time since the Department’s closure and bringing back a number of the series’ key players for another densely charted tale of international intrigue.

The new mystery begins to unfold from the point of view of one Abdul Ghali, a deskbound CIA analyst plucked from obscurity for an unprecedented field mission overseas. Working the Africa desk, Abdul has ties to Western Sahara, where his supervisors send him to meet with and debrief Milo Weaver, the legendary ex-Tourist who has gone to ground in Layounne. Feeling woefully ill-equipped for the field, Abdul nonetheless journeys overseas, only to land right in the middle of a precarious international power struggle. Weaver reveals that when the Department of Tourism ceased operations, he abandoned service to the United States to assume command of a new post-national intelligence organization called the Library. Weaver, with Abdul has his messenger, wants to convey evidence of a dangerous new international conspiracy back to the CIA, in the hopes of enlisting U.S. aid in countering a global threat. His plan is a gamble, however, as the U.S. may have a hidden agenda, endangering Abdul, Weaver, and the whole of the Library.

The Last Tourist is solid, representational Steinhauer, a fast-paced maze of intrigue that mixes the action-packed beats of a contemporary technothriller with a richly designed secret-world backdrop. Political complexity has never been a problem for Steinhauer, and he once again manages to effectively stage a massive cast of spies and agencies in service to a brisk, multifaceted plot. It occurred to me while reading it that the 2016 election has surely presented an even thornier challenge to the modern spy novelists than the collapse of the Soviet Union did in 1989. In a post-truth world ruled by global organized crime, how does one satisfyingly deliver closure to a conspiracy plot? If uncovering the truth in reality has no consequences, how can it realistically do so in fiction? Steinhauer struggled a bit with this fucked-up new paradigm in The Middleman, but he rebounds nicely here, building off the continuity of his previous works while also successfully weaving in the dark new mindset engendered by Trump’s subversion of America and the ever-mounting evidence of a world ruled by sociopathic organized crime. It doesn’t break any new stylistic ground in Steinhauer’s body of work — in the way that, perhaps,The Cairo Affair and All the Old Knives did — but it’s yet another fully engaging, smartly designed modern spy thriller.