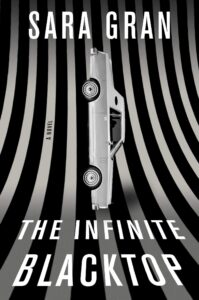 It’s pretty unusual for me to start a novel series in the middle, but I made an exception for Sara Gran’s The Infinite Blacktop (2018), and I don’t regret it. Not only does it stands quite well on its own, but it’s surprisingly philosophical and engrossing.

The private investigator at the heart of this layered multi-mystery is Claire DeWitt, star of two previous novels. Right out of the gates, Claire presents as a hard-boiled, knock-around detective with a cocky attitude and a tendency to end up in close proximity to danger. When Claire is nearly killed in a car crash, she quickly deduces — in a fog of near amnesia — that someone is out to kill her. Her present-day search for the man who’s trying to kill her leads to reflections on previous cases, including one she undertook in Los Angeles years earlier while pursuing her investigator’s license. Looking into the death of a famous artist, Claire ends up solving the surface mystery, but uncovers new ones — including philosophical ones about her sustained approach to life’s daily struggles.

The Infinite Blacktop had a slightly rocky start for me. The first-person, neo-Noir tone is peculiar, with a clipped, repetitive sentence structure. I also chafed against Claire’s anarchic tendency to do absolutely anything in the pursuit of her case; she can be kind of a jerk, and commits random crimes in the spontaneous pursuit of her self interests. But eventually I fell in with the novel’s quirky rhythms, as Claire’s past and present cases blend into a sort of strange, hybrid milieu: Nancy Drew meets Philip Marlowe, maybe? There’s a playfulness to Gran’s approach to this character, a “girl detective” who grows up into a cruel, unforgiving world. The track in which she pursues the death of artist Merritt Underwood is particularly compelling. Gran’s depiction of LA’s sun-baked asphalt neighborhoods is authentic, making me feeling nostalgic for Southern California. But best is the meta-text surrounding Claire’s inner drive to pursue the truth, which is deftly layered in across all the timelines, and transforms the simple surface furnishings of Claire’s day job into an existential meditation on life itself. In that sense, the novel is insightful and empathetic, and it left me with a deeper impression than I was initially expecting. Unusual and impactful stuff.