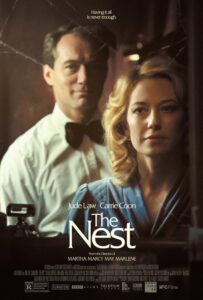 Sean Durkin’s film The Nest (2020) is easily one of the best films I’ve seen all year. It’s a modest-looking but moody and atmospheric period drama that feels timelessly relevant, using 1970s film-making sensibilities to depict a 1980s setting, and making it all relevant to the current moment’s ongoing reckoning with the past forty years of unfettered, destructive capitalism. The O’Hara family — financial trader Rory (Jude Law), horse-riding trainer Allison (Carrie Coon), and their two children (Oona Roche and Charlie Shotwell) — live an idyllic life in New York state. But Rory is restless, and after years of living abroad, he wants to move his family back to England for a fresh start. The more pragmatic Allison has qualms about the move, but is eventually swayed, and the well-to-do family picks up stakes to move to a posh country estate in Surrey. Rory commutes to London for his new, high-powered job, and he has major ambitions to make his fortune. But those plans have hidden costs, and as the O’Haras’ new life in England unfolds, the foundations of their familial happiness gradually start to deteriorate.

The Nest is a subtle, quiet film, outwardly modest, that uses the tools at its disposal to impressive effect. The sensibility reminded me of early Robert Altman or Nicolas Roeg, a simple but visually rich, pre-blockbuster style that deploys beautiful shot composition, intentional sound design, and a subdued jazz score to immerse the viewer in a carefuly crafted world. And that world is thematically relevant to the story, a glimpse back in time to a simpler, almost innocent 1980s that clearly doesn’t realize it’s on the verge of an inexorable downward economic spiral, as the impacts of financial sector deregulation loom. From its haunted country manor to its eerily empty London streets, The Nest has a calm-before-the-storm quality, which brilliantly serves its narrative. The O’Haras are a family that have it all, and — like the world economy — it’s about to destroy itself because it isn’t satisfied, hungry for even more. To bring that point home, Durkin introduces an almost subliminal horror vibe, turning the O’Haras’ deceptive mansion into a symbol of their hollow, wasteful pursuits. The creeping erosion of their lives is given expert life by perfect performances from Law, as the recklessly reaching Rory, and Coon, whose sharp, no-bullshit demeanor gains fury as it grates against the stodgy mores of the British upper crust. The cumulative result of these assets is a gripping gut-punch of a film that might have been a cautionary tale if it weren’t too late in its message. Instead, The Nest stands as a masterpiece of slow-building domestic horror that examines the calm, innocent way people — and by extension, society — can careen heedlessly past the point of no return. 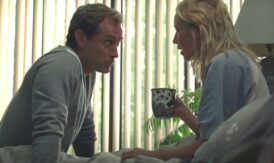 Jude Law and Carrie Coon in The Nest 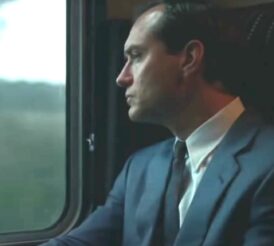 Jude Law in The Nest 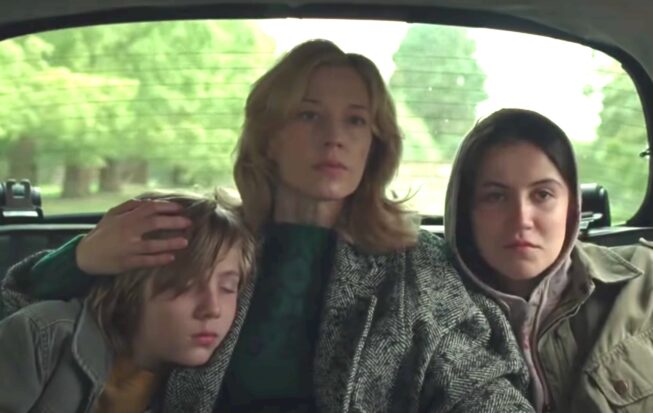 Charlie Shotwell, Carrie Coon, and Oona Roche in The Nest

Well, That Was a Year That Happened