Soundtrack for the New Novel

One of my coping mechanisms when stressed or depressed is to throw myself headlong into writing. This is hilarious, of course, since writing inevitably leads to more stress and depression. Ah, the joyous writerly feedback loop! Anyway, here we are, just on the other side of 2020, which produced more stress and depression than any single year in most of our lifetimes. In my case this translated, despite a nearly constant urge to quit, into a metric fuck-ton of writing. Among other projects, I worked on a new novel last year, and completed the first draft on New Year’s Eve. For all the usual fits and starts and frustrations of the process, I found it an essential, sustaining project during a time of smothering uncertainty.

Since my last novel project was a dystopian, near-future conspiracy thriller — i.e., one step removed from contemporary reality — I decided to do something fun and frivolous for my 2020 book. I won’t go too far into it other than to say that it’s about a band of postmodern prog-metal-jazz-funk musicians touring the United States in an alternate universe while saving the world. Essentially, I envisioned my dream band and set them loose on weird, otherworldly adventures.

As you can imagine, a novel of this nature needs a soundtrack. In my case, this soundtrack generally consisted of randomizing all the songs in my Google Play library…er, I guess it’s now my fucking YouTube Music library. (Google, why hast thou forsaken me?) Some of these tunes have lingered on my playlists since the 1980s, when formative influences like Devo, Fishbone, and Oingo Boingo lodged themselves permanently into my musical DNA. But I’m always searching for new music, or at least music that’s new to me. The novel gave me some added incentive, so here are some of the albums I discovered in 2020 during my quarantine scribbles. 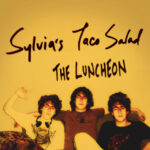 Sylvia’s Taco Salad, The Luncheon (2019). I’ve got to start with The Luncheon, because if not for this album, I probably wouldn’t have written this post. Early in the pandemic, the man behind this album, John Baxter, reached out to me to gift it to me via Bandcamp. (Speaking of which, Bandcamp is the place to buy indie music on the internet, and I’ve been kind of hooked on it ever since this introduction.) Based on previous posts about music, John thought this would be my kind of thing — and oh, was he right. The Luncheon is a raw, inventive grab-bag of postmodern studio oddities that feels like a collection of hidden interstitial tracks that might have glued together an early Secret Chiefs 3 album. It’s got everything from sinister ambient rumble (“Comedy Noises”) to upbeat quasi-ska (“Puslinch”) to bizarre dark comic alt-rock (“Bear with Us”) to zany dark circus antics (“Night of the Scooty Fluff,” which feels like the Aquabats and Darth Vegas fell into a blender). It has a brash, quirky sense of humor, and every track invents its own genre. A delightfully weird concoction that blends nicely into my stew of influences. More, please! 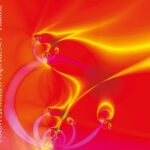 Counter-World Experience, Fraktal – Always Home (2004). I haven’t listened to much “instru-metal,” but I think Counter-World Experience qualifies, and I’ve enjoyed having their album Metronomicon in my library for a while. This year I found their much earlier release Fraktal – Always Home, and I’m not sure I’ve given it enough listens for a legitimate review. So far, though, I’m finding it an agreeable addition to my instrumental prog-metal collection, a nice mix of heavy-groove melody, technically accomplished playing, and rhythmic complexity. 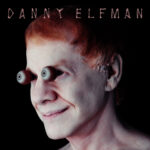 Danny Elfman, “Happy” (2020) and “Sorry” (2021). Speaking of Oingo Boingo, its former front man and current soundtrack composer extraordinaire Danny Elfman release his first “pop” (more or less) single in over twenty years, and more recently, a follow-up. Both are delightfully angry and macabre, “Happy” all the more so for its chilling music video. (I’ll just let that one speak for itself.) Great to see that Elfman can still rock out after all these years. 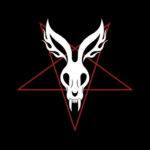 Mr. Bungle, The Raging Wrath of the Easter Bunny Demo (2020). I wouldn’t necessarily consider myself a fan of thrash metal, but my tolerance for metal-infused music has grown substantially over the past decade. I’m also a huge fan of Mr. Bungle, and just about anything that Mike Patton and/or Trey Spruance put their hands on, so this was a great year for them to re-record their lost 1980s thrash metal opus The Raging Wrath of the Eastern Bunny. It’s entertaining in a thrashy kind of way, and I could pretty much listen to Patton vocalize in any context, even if this isn’t exactly my Mr. Bungle. 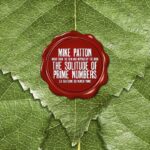 Mike Patton, The Solitude of Prime Numbers (2015). This is another recent pick-up that I’m not sure I’m qualified to review in any kind of depth. But I will go so far as to say that it’s a  terrific album with an eerie, thoughtful vibe that reminds me of Patton’s other more experimental releases and soundtracks. It also makes for excellent writing music. 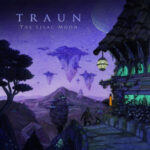 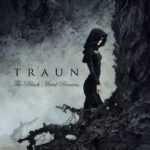 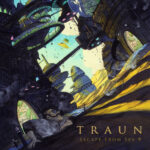 Traun, The Lilac Moon (2017), The Black Metal Princess (2017), and Escape from Spa 9 (2017). One of my favorite bands of the early 2000s was the incredible, hard-to-categorize Estradasphere, a brilliant post-modern mashup of jazz, metal, classical, surf, and — well, let’s just say every genre? (I saw them play in LA in 2007 and it’s one of my favorite concert memories.) In 2003, this band’s drummer, Dave Murray, released a wonderful album called The Deserts of Traun: Part III (The Lilac Moon), a largely instrumental project that blends Estradasphere’s kitchen-sink sensibility with something of a narrative epic fantasy vibe. Murray re-recorded and expanded on this project with the albums listed here, and they’re brilliant, an immersive musical journey. 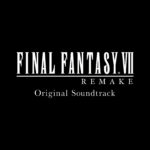 Various Artists, Final Fantasy VII Remake Original Soundtrack (2020). Speaking of epic fantasy, that original Deserts of Traun album conjured memories of playing Final Fantasy VII on the PlayStation. More recently, Jenn and I inhaled the Final Fantasy VII Remake, and I’ve also been greatly enjoying the soundtrack, which updates and reimagines Nobuo Uematsu’s iconic video game score while also adding new material. It’s a treasure trove of upgraded nostalgia that has a spine-tingling effect for those of us whose experience with the original FFVII was a landmark gaming experience. But even if you don’t know the game, this is some exceptional writing music for fantasy and science fiction writers. 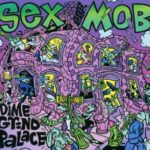 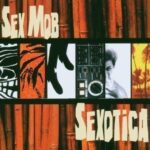 Sex Mob, Dime Grind Palace (2006) and Sexotica (2016). I’m not even sure how I stumbled across the groovy, drunken jazz of Sex Mob, but it slots in very well with my eclectic tastes. There’s something infectious about Sex Mob’s rolling, horn-infused improvisations; they’re like a New Orleans brass band that fell apart, moved to LA, and reimagined itself by improvising scores to quirky noir movies. Sometimes it feels to me like a melted-together version of Flat Earth Society and Tipsy. Great stuff. 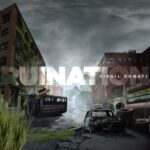 Virgil Donati, Ruination (2019). Virgil Donati is one of the most amazing prog drummers alive, one of those guys whose sense of time seems to veer across dimensions.  I latched onto him from the brilliant Planet X album Quantum and have been gladly coming across his work in other contexts ever since. Donati is also a fantastic keyboardist and composer, and Ruination a brilliant showcase for his virtuosity. This video is a stunning example of his drumming prowess. 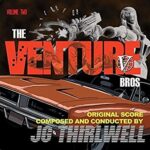 J.G. Thirwell, Music of the Venture Bros. Volume Two (2016). Somehow the Venture Bros. TV series never hooked me, buts the show’s sick music from composer J.G. Thirwell sure as hell did. I first encountered Thirwell via his nifty instrumental project Steroid Maximus, and the Venture Bros. soundtrack is of a piece with that material, a stirring mix of old-school jazz samples, horns, and synthesizer work. Spectacular writing music. 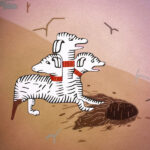 Buke & Gase, Scholars (2019). Anthony Garone recommended this one on his Make Weird Music channel, and initially it didn’t strike me as my kind of music. The more I listen to this one, though, the more I get into it; underneath its casual indie-pop first impression is a rolling, sexy complexity that is richly layered and unexpected. I’ll definitely seek out more of their stuff, especially knowing how impressive they are live, managing a full, rich sound with only two members.  This earlier performance (from before the band’s name-change) doesn’t reflect the robust studio mix of Scholars, but it does provide a great example of their unique vibe. 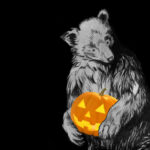 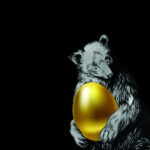 Umlaut, Kintsugi (2019) and Arunachala (2019). The Australia-based Umlaut is the brainchild of Mr. Bungle sax player Clinton “Bär” McKinnon. Evidently he started Umlaut as a way to channel his Bunglesque ideas after the band broke up. A number of great albums have been released since then, including these two recent ones: slick, experimental postmodern jazz-rock. These should delight fans of McKinnon’s earlier bands. 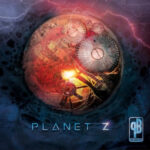 Panzerballett, Planet Z (2020). And finally, my album of the year: Panzerballett’s latest opus, Planet Z. Led by jazz-funk-metal guitarist and musical mad scientist Jan Zehrfelt, Panzerballett has been my favorite band since about 2012 (wresting that title away from Secret Chiefs 3), and it’s probably held that crown longer than any other band. Planet Z is different from earlier albums, in that its stable five-piece lineup was replaced by a revolving door of guest musicians, in keeping perhaps with the pandemic lockdown conditions under which it was assembled. Zehrfeld enlists a full battery of amazing musicians for this project, especially on drums, where Morgan Ågren, Gergo Berlai, Virgil Donati, Hannes Grossmann, Andy Lind, and Marco Minnemann contribute state-of-the-art prog drumming. Panzerballett’s track record for intense, complex music was already unmatched prior to this album; somehow, Planet Z ups the ante even more. I’ve been listening to this one incessantly since its release, without getting sick of it, and constantly hearing new elements. A stunning piece of work.

Film: A Conspiracy of Faith

Film: The Lady from Shanghai