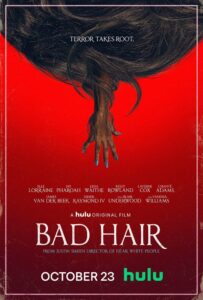 There are ways in which Bad Hair (2020) is painfully unsubtle, and moments when it misfires tonally, but overall this unique, stylized film successfully mixes horror and social commentary to entertaining effect. Set in the late 1980s, the story revolves around Anna Bludso (Elle Lorraine), a chronically aspiring music industry hanger-on who works for a black-owned television station. Anna has designs on being a trend-setting veejay, but when the station is purchased by a new company, her mentor leaves and it looks like the death of her dream. Until, that is, the new honcho Zora (Vanessa Williams) notices her. In becoming her benefactor, Zora encourages Anna to change her look, which involves replacing her hair with a luxurious weave. The new style transforms Anna’s career, but unfortunately her success comes with a price: her new hair is positively bloodthirsty.

Bad Hair might have benefited from less obvious messaging in the script, and there are moments of dark humor — often involving Lena Waithe in a supporting role — that clash with the otherwise play-it-straight dramatic tone. But overall it’s a clever, well clocked film that does exactly what it sets out to do: uses Anna’s rejection of her natural look as a symbol of the societal pressures on black people to conform to white power structures. I was particularly impressed by the conscious timelessness of its film-making style, which feeds into the theme of historical oppression: released in 2020, the film is set in 1989, with the grainy film-stock look of 1975, and a Hitchcockian music score that might have been from the fifties. It adds up to a bracing, unpretentious, smart B movie that slots in nicely alongside the current wave of black-directed, issues-driven genre films like Get Out, Sorry to Bother You, and Us. 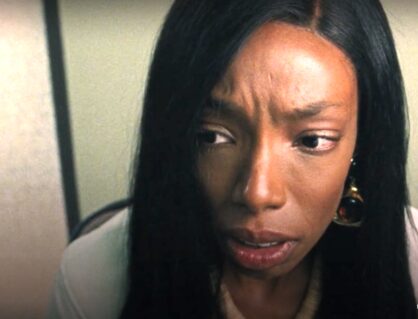 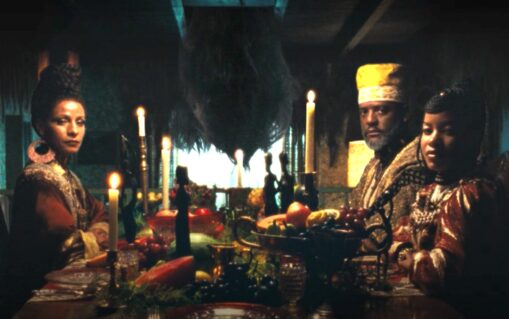 A scene of the nightmarish hairscape of Bad Hair