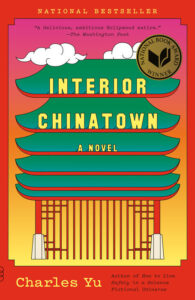 Interior Chinatown (2020) is Charles Yu’s fourth novel, but it took seeing his name in the credits of Lodge 49 — one of my favorite shows — to draw my attention to his fiction. Yu has written for other genre series as well, including Legion and Westworld, which is more than enough to establish his Hollywood street cred. But Interior Chinatown provides more incontrovertible evidence of the author’s familiarity with the film and television industry: its terminology, its tropes, and most meaningfully its subtexts.

It’s kind of a hybrid narrative, part-novel, part-screenplay, about Willis Wu, a bit player in the fictional universe of a generic American cop show called Black and White. Willis plays one of many Generic Asian Men in this quirky faux reality, but he aspires to greater things, perhaps even expanded speaking roles or the pinnacle of Asian acting roles: Kung Fu Man. In the meantime, he bides his time in the stultifying confines of TV Chinatown, living upstairs from the restaurant where he works with scores of other typecast extras from Asian Central Casting. But one day, when yet another dead body turns up in Chinatown, Willis finally gets his opportunity to step into the spotlight and forge a new identity.

Interior Chinatown is an ingenious piece of work, a breezy and amusing metafiction that deploys the language of cinema to examine under-explored racial identity issues in American culture. The concept is brilliant, a broad literalized metaphor that imagines the plight of the Asian American actor as a kind of legitimate reality, blending imaginative show business logistics with reflections on genuine sociopolitical issues. The execution is quirkily playful, with timely inserts of thought-provoking seriousness, and it speeds along its course addictively without overstaying its welcome. The build-up succeeds more than the payoff, I think, when already-effective messaging grows unnecessarily heavy handed, but by and large it’s a spectacular book that says interesting, important things in a highly entertaining fashion.

Film: The Woman in the Window