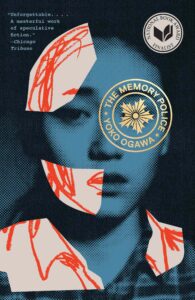 Given its intense focus on loss and grief, I mistook Yoko Ogawa’s The Memory Police for a recent work, perhaps even a pandemic project. In fact, it’s a translated novel originally published in 1994, which makes the fact that it speaks so powerfully to the current moment either a feat of prescience or a sign of its timelessness. The Memory Police takes place on a nebulous, unnamed island, where a young novelist navigates a quiet, simple society noteworthy for one remarkable aspect: every now and then, random items disappear. Birds, hats, flowers, particular foods — one by one, the citizens of the island forget these items. These “disappearances” are ruthlessly enforced by an officious state agency known as the Memory Police, who also abduct and vanish anyone who defies them. As the story progresses, the novelist becomes aware of underground efforts to hide certain individuals from the Memory Police, people who retain their memories of forgotten things. When the novelist learns that her publisher, R, is one of these people, she joins the effort, hiding R in a secret room of her house. But as the disappearances continue, her efforts grow increasingly tenuous – and possibly futile.

Translated by Stephen Snyder, The Memory Police is a haunting, subtle read, with a spare, prosaic writing style that contributes to the allegorical ambience. While there is a political veneer to the island’s backdrop, it seems less targeted toward actual authoritarianism than to the ruthless way societies self-police, reinforcing norms and allowing treasured elements of the world to fade and vanish through intolerance and conformity. It’s a smooth, affecting read that reminded me a little of Karin Tidbeck’s work in its unsettled world and careful use of language. The only jarring element for me was the protagonist’s concerns about losing her ability to communicate, which occasionally felt too recursive, a writer at war with the creative process writing about a writer at war with the creative process. But that didn’t detract much from an otherwise compelling, insightful read about grief: not just for things already lost, but for the fear and dread of losing even more that is precious. Perhaps not a comforting read for a climate-change-wracked, pandemic distorted world, then, except perhaps as an earnest entreaty to cherish what we have while we still can, and do our best to save it.

Film: All the President’s Men