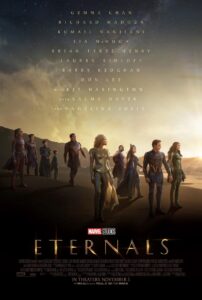 It certainly appears that Marvel intends to leave no stone unturned in mining their vast comics universe for new content. Fortunately, they’ve injected something different into the mix with Eternals (2021), which brings Chloé Zhao into the MCU fold as director/co-writer. Compared to much of Marvel’s fare, the Eternals are an obscure bunch, and the film sets a daunting task for itself: serving as both an origin story and a satisfying standalone adventure for a massive group that includes ten major characters. While hardly seamless, the response to this challenge is commendable, leading to a bracing entertainment with a more satisfying final act than usual.

The Eternals are actually super-powered aliens in human form, sent to Earth hundreds of years ago to protect it from another alien race, the Deviants. Led by a healer named Ajak (Salma Hayek), the Eternals live a secret history behind the scenes of human civilization, carrying out their mission — and in fact they succeed in it, exterminating the Deviants. But their godly master Arishem doesn’t assign them new duties thereafter, so they live out their years on Earth under orders not to directly interfere in human affairs. In the present day, two of the Eternals – Sersi (Gemma Chan), who can transmute natural substances, and Sprite (Lia McHugh), an illusionist forever locked in child-like form – live together in London. A Deviant attack there coincides with the reappearance of fellow Eternal Ikaris (Richard Madden). The three of them determine that a Deviant sighting may be evidence of a renewed threat, and they quickly mount a worldwide expedition to reunite the Eternals and face it down. But as the allies come back together, they soon realize that their long-ago mission to Earth has a hidden layer, and it may not be nearly as altruistic as they’ve been led to believe.

By MCU standards, Eternals starts with something of a slow-burn approach, but given the specifics of the plot it’s impossible to imagine how any other strategy would have worked. Along with the four Eternals mentioned above, the script needs to introduce Kingo (Kumail Nanjiani), Phastos (Brian Tyree Henry), Gilgamesh (Don Lee), Makkari (Lauren Ridloff), Druig (Barry Keoghan), and Thena (Angeline Jolie), rounding out a colorful and idiosyncratic clan that nicely delineates its personalities. It also has to establish the vast scope of its timeline, and scads of relevant backstory, in order for its present-day action to make sense. To accommodate all this, the earliest stages are prologue-y, and numerous flashbacks are used to fill in the blanks. All these logistics interfere with the narrative rhythm, but it’s time well spent, ultimately paying off when the present-day action accelerates. The second half of the film is uncommonly satisfying; indeed, Eternals eludes that nagging, recurring pitfall of the MCU: the Finale of Incoherent Spectacle. Zhao’s direction is visually sumptuous throughout, but it really takes flight during the final conflict, which – while still being spectacular – is refreshingly coherent, allowing you to see and appreciate the action. (Let’s hope that this trend, which follows from the endings in Hawkeye and Shang-Chi and the Legend of the Ten Rings, continues.) Additionally, the combat is informed by character: not just the powers and techniques, but the characters’ reasons for fighting (or not!), and how their relationships influence in-the-moment decisions during the violence. There’s a deep ethical conundrum at the center of the affair, which helps fuel the interactions of the characters during the crucial final battle. The MCU has a bad habit of making its home-stretch battle royales disposable, but Eternals makes you care about what’s happening and why. In the end, it may not be the most streamlined entry in the MCU canon, but it’s a thoughtful, unique spin on the formula, diverse, attractive, mindful of its messaging, and refreshingly unpredictable. 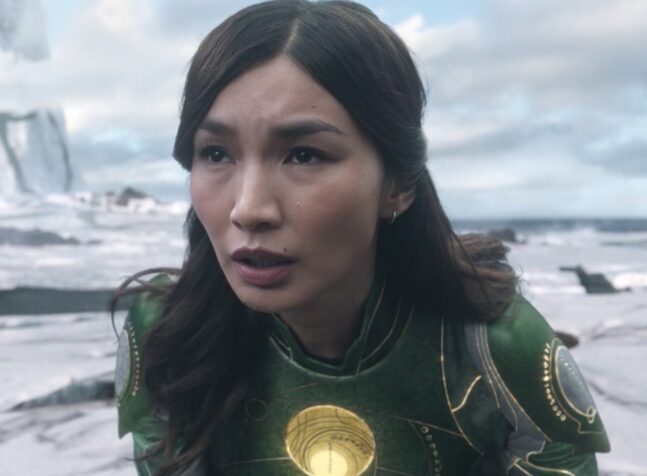 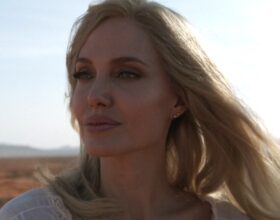 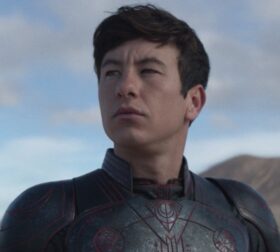 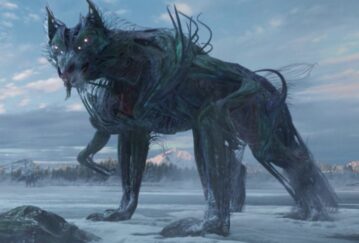 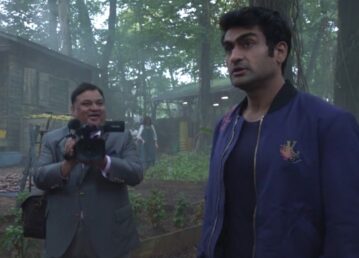 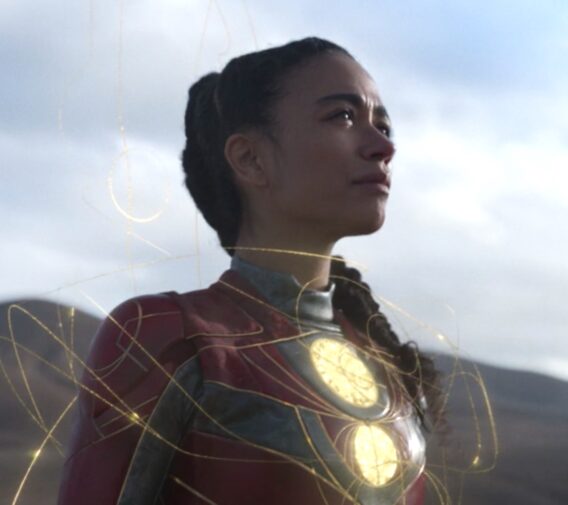 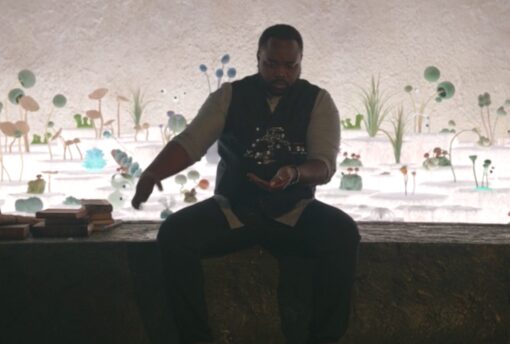 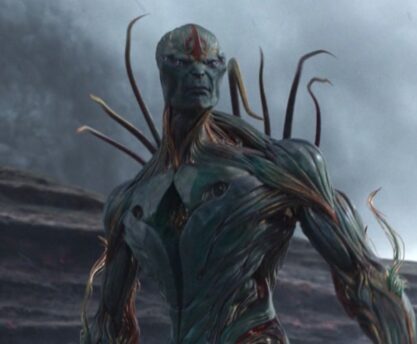 Another deviant in Eternals 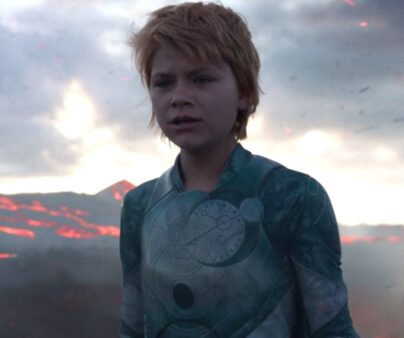 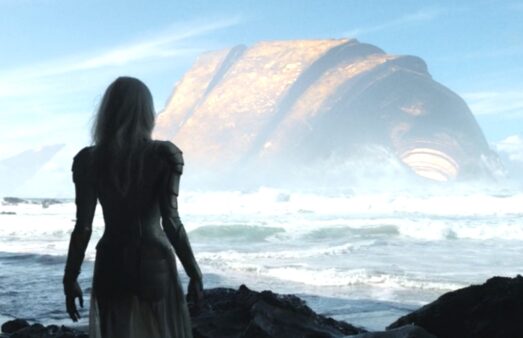 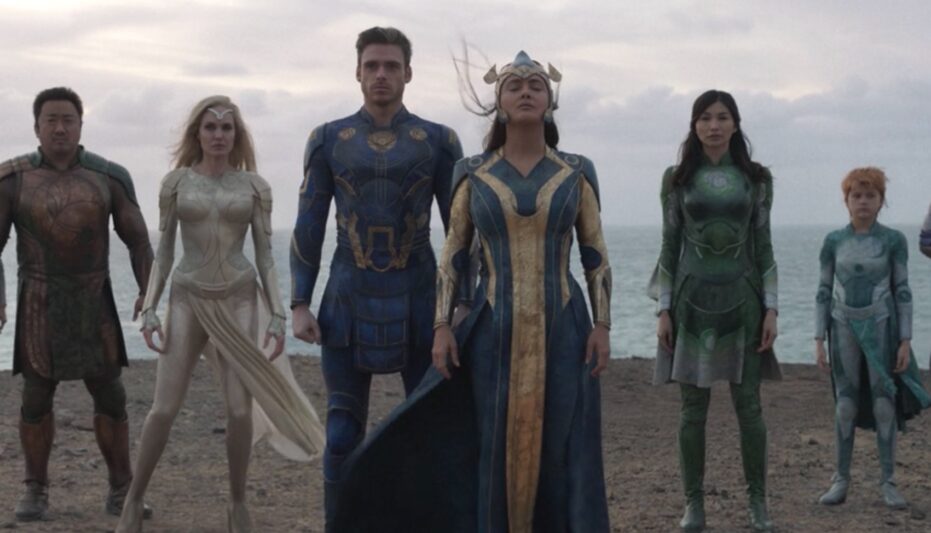