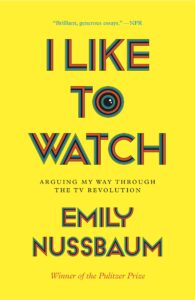 Good television criticism makes me want to up my game; the best television criticism makes me want to hang it up entirely. Emily Nussbaum’s first-rate I Like to Watch: Arguing My Way Through the Television Revolution (2019), a collection of essays, reviews, and auteur profiles, is compulsively readable, thoroughly enjoyable, and so eloquent it made me despair of my own abilities. (Well, until Jenn heard me complaining and shouted, “Come on! She has a Pulitzer Prize!” Fair point, fair point.)

Nussbaum is a smart, insightful writer and her book, which begins with a twenty-page essay entitled “How Buffy the Vampire Slayer Turned Me into a TV Critic,” hooked me instantly. Its title is targeted, but this opening piece is more than just an intelligent, nuanced appreciation of a great series. Identifying Buffy as a key franchise in television’s transformation from the industry’s old way of doing business to the streaming-empowered free-for-all of Peak TV, she puts her finger precisely on the media-consumption journey of many of us children of Generation X. Like Nussbaum, I grew up deriding the repetitive, formulaic TV of my youth, instead clinging to snobbishness for cinema and literature. Buffy is the perfect “bridge” show for discussing TV’s dramatic evolution into a new phase that combines the best of all worlds: episodic, cinematic, and literate. It’s a compelling lead-off hitter to the volume and sets the table for the pieces that follow, largely geared toward exploring the post-Buffy landscape, but occasionally peering backwards at earlier groundbreaking work.

Nussbaum displays an eclectic range of interests, one that extends well beyond the usual suspects of “New Golden Age” TV. The Sopranos, of course, receives a much-deserved and well considered entry in the second slot; if Buffy was a bridge show, The Sopranos squarely sets its feet on the other side of the river. But Nussbaum refuses to narrow her focus on the dark, gritty, antihero shows that dominated the TV renaissance dialogue of the oughts. She’s more interested in the medium’s breadth and possibility, the shifting models of its production and its cultural impact. There are essays devoted to differently great shows that she loves (Jane the Virgin, The Good Wife, The Comeback), some that she doesn’t (True Detective, The Marvelous Mrs. Maisel), and still more that wrestle with the legacies of important cultural touchstones with checkered legacies (Sex in the City, Lost). She writes just as cogently about product placement and reality television as she does about the TV’s modern classics. Generally, I like reading reviews and criticism of shows I’ve already seen, to compare notes and rekindle my memories, but here I found myself enjoying virtually every essay, including those about shows I have no intention of watching. And there are fascinating, in-depth profiles of important TV creatives like Kenya Barris, Jenji Kohan, Norman Lear, and Ryan Murphy.

The centerpiece of the collection may well be “Confessions of a Human Shield,” a novella-length essay sparked by the Harvey Weinstein scandal and #MeToo. It’s an extended, multifaceted examination of the perils of loving the art of problematic creators, where she wrestles with the work of fallen idols like Woody Allen and Louis C.K. How does one cope with that appreciation in light of troubling new knowledge? It’s a rich and detailed journey through the issues, even-handed in its approach and wise in its conclusions. Along the way, it includes a brilliant review of Hannah Gadsby’s incredible stand-up special Nanette, a show so intense, heartfelt, and affecting that I never had the guts to try to review it, for fear of selling it tragically short. (Seriously, just go watch it.)

So many drastic changes have happened in television over the past thirty years, and its content is so vast, rich, and complex, that it’s hard to remember “the before times” when TV was an empty, limited distraction. Nussbaum’s book reminded me of how far things have come, a brilliant articulation of the lures and wonders of the medium I’ve spent so much time of my recent life examining. For anyone looking to better understand and appreciate the modern TV landscape, I Like to Watch is a must-read.