Novel: The Bruising of Qilwa by Naseem Jamnia 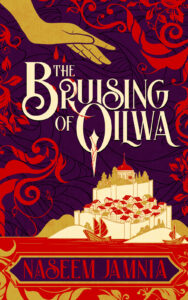 Secondary-world fantasy isn’t traditionally my sweet spot, but when Naseem Jamnia’s The Bruising of Qilwa (2022) showed up in my mailbox I simply couldn’t resist the gorgeous package from Tachyon Publications. (What a beautiful cover design by Elizabeth Story!) Jamnia’s compelling debut tracks the efforts of Firuz-e Jafari to acclimate to a new life after fleeing her troubled homeland to take refuge on the free island state of Qilwa. Firuz, a nonbinary healer who wields blood magic, finds a patron who runs a free clinic and begins to build a new life. Their efforts to support their family are quickly complicated when a potentially powerful new apprentice falls into their orbit, and as a strange new blood disease emerges, creating new political dangers for blood magic practitioners in Qilwa.

One of the novel’s comparison titles is N.K. Jemisin’s Broken Earth trilogy, and while The Bruising of Qilwa doesn’t match that series’ heft and power, it satisfyingly delivers a similar vibe. Firuz is a sympathetic, well drawn protagonist, marginalized not for their gender identity – refreshingly uncontroversial in this world – but for their nationality and magical gifts, which feed into thought-provoking themes on how ideological and territorial clashes can inform individual experience. The secondary characters surrounding Firuz are also nicely delineated. The world isn’t vast in scope, but feels authentic and lived in, with subtle cultural differences and magical touches to give it a unique flavor. All these components add up to a quick, engaging read with real heart and a thoughtful subtext to its immersive setting.