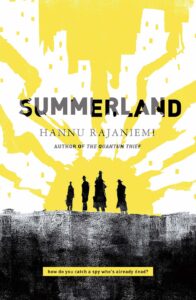 When it comes to “big idea” specfic, Hannu Rajaniemi is one of the best in the business. In his fourth novel Summerland (2018), he enters the burgeoning new subgenre of speculative spy fiction with a pre-World War II tale of espionage and the afterlife. Set during an alternate Spanish Civil War in the late thirties, Summerland envisions a timeline wherein the existence of the afterlife has not only been proven, but its science has advanced enough to enable communication between the realms of the living and the dead. Aside from the broad psychological ramifications on the world at large, the afterlife also significantly complicates the business of spycraft, now that sources can be cultivated and intelligence gathered from the realm of the dead. Indeed, Summerland has so come to dominate British intelligence efforts that the work of the “Winter Court” (the branch of the service plying its trade in the living world) is something of a sideshow. Rachel White is a rare female officer in the Winter Court, and she may be the key to proving its relevance when a real-world Soviet defector reveals the Russians have turned a British agent in Summerland. His name is Peter Bloom, a communist sympathizer who now exists as an aetheric being who can occasionally inhabit the world of the living by “downloading” himself into the body of a medium. Rachel sees Bloom’s treachery as a major national security threat, and sets about bringing him to justice, but the game of cat-and-mouse between them soon proves to have much broader implications than simple geopolitical rivalry.

Summerland enters Rajaniemi into a recent club of speculative spy-fi writers who successfully blend the tropes and rhythms of spy fiction with the fantastical concepts of fantasy and SF. The best books of this type, such as Ian Tregillis’ Milkweed Triptych and W.L. Goodwater’s Cold War Magic series, manage to walk a fine line between genres, keeping balance to deliver the best of both worlds. It’s possible Rajaniemi tilts further into the skiffy neepery of his creation than Goodwater or Tregillis; as usual, his prose explodes with concepts and ideas, layering the page with neat, distracting detail. But the involved “magic system” of Rajaniemi’s afterlife and the sentence-level plot detail of his spy yarn are both thought-provoking enough to engage at the sentence level, even if the big picture occasionally gets muzzy. This keeps the momentum going through to a finale that deftly gathers the threads into something coherent and satisfying, an “aha” realization that draws out the way the themes and the world-building interact. It’s another dazzling narrative trick from Rajaniemi, who’s made a career out of them.