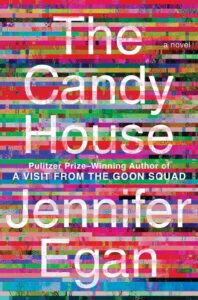 I have a feeling certain readers will dismiss Jennifer Egan’s The Candy House (2022) based on the unique circumstances of its composition. For one thing, it’s a semi-sequel to Egan’s Pulitzer Prize-winning novel A Visit from the Goon Squad, to which it will almost certainly be compared. For another, it’s a case of a revered mainstream author crossing over into SF, which for certain science fiction purists will come across as“genre appropriation. As a huge fan of Goon Squad whose baseline reading mode has a traditional specfic origin, I found it impossible not to bring that baggage to bear as I dove into The Candy House. But I’m also a huge proponent of Egan’s work, which helped me to stow the baggage and enjoy this remarkable new work.

A Voyage from the Goon Squad is a a dazzling mosaic of thematically connected stories revolving around the music industry, its “chapters” ricocheting through time, space, and viewpoint to weave a rich world of characters and ideas. The Candy House borrows the nonlinear structure of Goon Squad, as well as some of its characters (and many of their descendants), to build a similar mosaic – this time, with a broader sweep. If music is the thematic glue of Goon Squad, here it’s information technology, and more specifically social media, the baffling, ubiquitous connective tissue of the twenty-first century. The opening story, “The Affinity Charm,” sets the stage for this dialogue by visiting Bix Bouton, a Goon Squad tech mogul whose brainstorm here – Own Your Unconscious, a procedure for externalizing memory to enable users to experience each other’s pasts online – transforms the world. In the alt-universe of The Candy House, Own Your Unconscious is released in 2016 – a year chosen with intention, I imagine, to coincide with the moment our reality well and truly snapped. The emergence of this new tech serves as something of a dividing line for Egan’s subsequent musings, which delve both backwards in time – occasionally overlapping with the events of Goon Squad – and forwards, forging into straight-up futurism. The structural technique of the earlier novel is thus repurposed to explore the mess we’ve made of the Information Age, from its fictional origins to its science fictional results.

I’ve always found Egan to be something of a specfic-adjacent writer. While her work may have broader mainstream appeal, she has often displayed a knack for intelligently, accessibly deploying science fictional thinking. (Her spectacular novel Look at Me may be a prime example.) In The Candy House, she leans into this skiffy mindset like never before. The novel is constructed almost like a social network, a sprawl of loose connections orbiting a core theme, playing out like an audacious attempt to make sense of the nonsensical now. While the pieces vary wildly from one to the next – like any collection, it has ups and downs as the author experiments with form and message – they have a cumulative purpose, painting on a broad canvas to muse about the opportunities and challenges of living in a complexly networked world. In so doing, Egan acknowledges both the web’s founding idealism and its inherent toxicity, a dichotomy illustrated here by dueling fictional corporations. On one side is Bix’s Mandala, which launches like a jazzed-up Facebook, an initially exciting means of long-distance connection that ultimately devolves into the realm of the “counters,” as Big Data begins gathering, selling, and commoditizing personal identity. On the other side is Mondrian, a reverse reaction, dedicated to ensuring privacy in service to the anti-surveillance “eluders,” who wish merely to exist without an intrusive internet footprint. This divide engenders the themes that permeate the book, carrying the reader up and down spectrums: from open sharing to total isolation, from honest expression to cynical misinformation, from the collective to the individual. There are standout stories, of course. “Lulu the Spy, 2032,” for example, deploys striking, choppy language in its immersive tale of espionage enabled by human-technology interface. And “See Below” perhaps best represents the book’s broader themes, a complex email epistolary that brilliantly exemplifies the way tech intended to enable communication is leveraged in obfuscatory, self-interested ways – even when it’s in service to an honest attempt at human connection. But stand-out chapters isn’t the point; it’s less about the pieces than an overall impression, one that skillfully conjures insight into the fascinating messiness of the modern world.

So, about that baggage I brought with me to The Candy House? Mid-read, it had me thinking that perhaps the novel wasn’t as adroit and successful a structural exercise as Goon Squad, and that despite it’s futuristic reaches, it might not be skiffy enough for the die-hard science fiction crowd. But after the fact, those nagging background impressions melted away. The Candy House is a deeply impressive, layered piece of work, difficult novel to stop thinking about, and will likely stand up as a timely, finger-on-the-pulse record of the intricate, messy era from which it emerged.