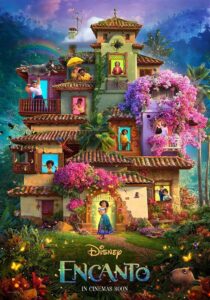 While it doesn’t have particularly good control of its messaging, Disney’s Encanto (2021) is a gorgeously animated film with unexpectedly interesting political subtexts. It takes place in the land of Encanto, where a group of immigrants have found refuge, led by the matriarch of Madrigal family, Alma (María Cecilia Botero). When each member of the Madrigal family comes of age, they’re gifted with a magical superpower they wield in service to the community. Young Mirabel (Stephanie Beatriz) is the exception – for some reason, Mirabel’s rite of passage never came. This doesn’t keep her for idolizing her family, despite the disparity of privilege its members are afforded — and a certain uncomfortable enmity between her and her perfect sister Isabela (Diane Guerrero). Then Mirabel discovers cracks, both physical and metaphorical, in the foundation of the Madrigals’ home, which she’s worried may threaten all of Encanto. Her family dismisses her concerns, too busy pretending everything is fine, but Mirabel is determined to get to the bottom of the problem in the hopes of preserving the family magic.

Encanto is a vividly imagined, colorful musical fantasy with an infectious early spirit. The plucky, good-hearted Mirabel is a relatable protagonist, and her quest is at once an outward save-the-world adventure and a journey of discovery, as she learns that her perfect community isn’t all it’s cracked up to be. The political allegory at the heart of it is rather effective: Encanto, a magical analog of the United States, is a vibrant, wonderful place populated with good people, but it has deep, unacknowledged flaws rumbling under its surface that threaten to destroy it. On this level, it’s effective as a fable, suggesting that sometimes “magic” takes a hell of a lot of effort to sustain, and that communities need to work together to keep things going. Unfortunately, the script never reckons with the toxic dysfunction within the Madrigal family – the cruelty with which Mirabel and her exiled uncle Bruno (John Leguizamo) are treated, and the psychological abuse Alma inflicts on the family in the interest of appearances. The clumsiness of this messaging is particularly glaring during a largely unearned happy ending, which fails to call its bad actors on the carpet. I could have done without this part of the U.S.A. metaphor; it’s an unfortunate destination for an otherwise fun, spirited journey. 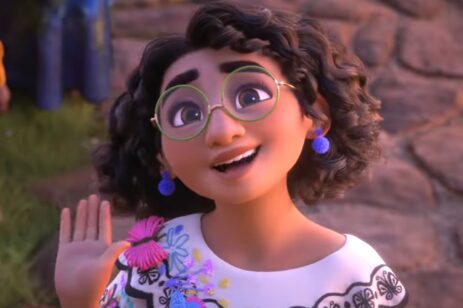 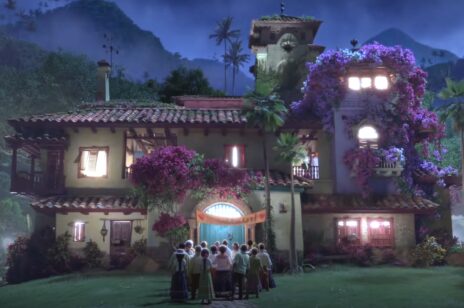 A scene from Encanto

Film: Doctor Strange in the Multiverse of Madness