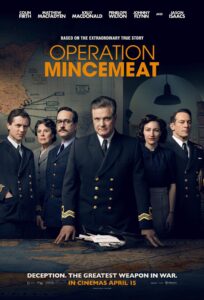 Back during the Spy 100 Project I rather enjoyed the staid spy film The Man Who Never Was, which dramatizes one of military history’s most elaborate and successful deception operations. Now, though, I would point viewers at the newly released, far more engaging Operation Mincemeat (2022), which isn’t exactly a remake but could easily be considered one. Based on historian Ben MacIntyre’s nonfiction account, this wartime drama situates us in 1943, just as the Allies are attempting to turn the tide against Nazi Germany. The British assault on Europe is imminent, but their next move, an attack on Sicily, is glaringly obvious. The British high command desperately needs to divert German military resources from the target, a task that falls to the Twenty Committee, an intelligence organization in charge of misleading the German military. Although the brass isn’t particularly enamored of its chances, they nonetheless endorse “Operation Mincemeat,” the joint brainchild of Lieutenant Commander Ewen Montagu (Colin Firth) and intelligence officer Charles Cholmondeley (Matthew Macfadyen) – with some timely support from future James Bond scribe Ian Fleming (Johnny Flynn). The plan is to plant papers on the corpse of a fictional military officer that confirm the British assault will occur in Greece, and make sure the body winds up the hands of German intelligence, paving the way for an easier landing in Sicily. Building out a small team to assist them, Montagu and Cholmondeley painstakingly build out the legend of “Major William Martin” and plan to launch the outlandish ploy.

Operation Mincemeat is a rather remarkable operation, and this new take – from director John Madden and screenwriter Michelle Ashford – gives it the engrossing framing it deserves. Like The Man Who Never Was, it dives deep into the many challenges and details of the mission, but is much more successful at bringing character and conflict to its players, even if it does so in rather conventional ways. The most obvious is the subdued love triangle subplot between Montagu, Cholmondeley, and widowed secretary Jean Leslie (Kelly Macdonald), who joins the team as the inspiration for “Pam,” Major Martin’s fictional girlfriend, her photo part of the “wallet litter” designed to make Martin’s fake life more convincing. The romantic trio is a tired set-up, but it’s quite artfully scripted and performed, particularly in scenes where the team is inventing Martin’s backstory and subtly infusing it with revealing glimpses of their own personalities. Adding to this element is the character of Hester Leggett (Penelope Wilton), the secretary who wrote Pam’s fictitious love letters. Ashford’s dialogue nicely integrates the bureaucratic tradecraft of the team’s legend-building with well executed emotional heft for the principal characters, each combating their lonely circumstances with obsessive devotion to an important, isolated, and secretive task. Madden ventures way from the smoky corridors of the intelligence world just often enough to broaden the scope with glimpses of the greater conflict. The result is a film that refreshingly shakes up the predictable turns of a group biopic with absorbing dramatic and historical context. 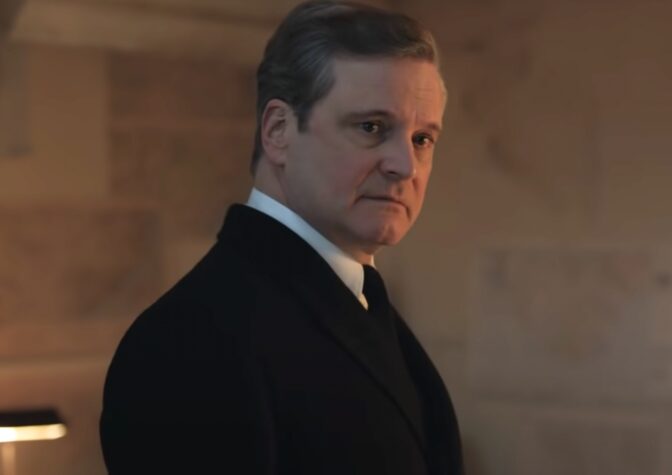 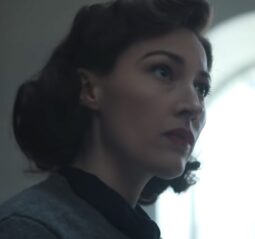 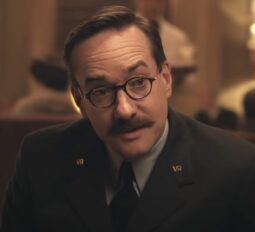 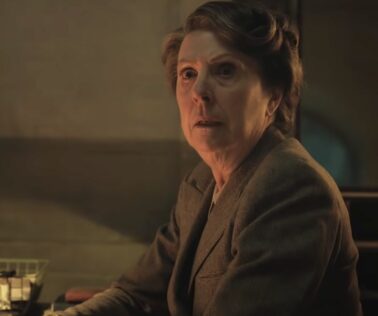 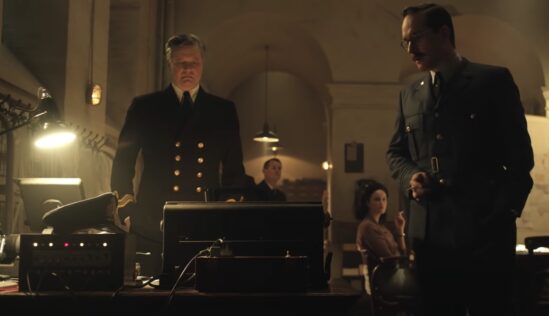 A scene from Operation Mincemeat