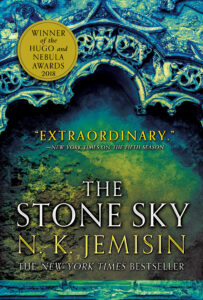 The previous novels in N.K. Jemisin’s Broken Earth trilogy played deft tricks with narrative, alternating viewpoints in clever, deceptive ways while chronicling the literal world-shaking adventures of its orogenic heroes. The Stone Sky concludes the saga in similar fashion, and if there’s a slight sense of diminishing returns here, it’s still a lush, impressive capstone. The Season triggered in book one has progressed, and Essun – surrounded by a retinue of survivors from the community Castrima – is tracking down her long-lost daughter Nassun. The Stillness is headed inexorably toward a new cataclysm, but the separated mother and daughter have much different ideas about the way it will play out, and how they will leverage their powers in the conflict. As their separate trajectories carry them toward confrontation, another narrative track spins up to fill in the cracks of the Stillness’ complicated history, putting the current crisis into illuminating context.

The richness of Jemisin’s world, when combined with the point-of-view legerdemain executed in its narrative strategy, can make the Broken Earth series challenging at times. I found The Stone Sky slightly more difficult than the earlier volumes on this score, perhaps as a cumulative effect, and in retrospect it might have been smarter to read the books consecutively to better keep the details organized. Even so, it’s hard not to be impressed by the whole-hearted, transporting way Jemisin immerses the reader in a memorable world. And here, the fantasy epic unexpectedly acquires a science fictional foundation, adding new layers of commentary to the enterprise – all with the same gorgeous prose that periodically provides insightful truth bombs about human interactions in an unfair world. Genre fiction is often at its best when it takes us to another world in order to show us our own from a new angle. If The Stone Sky didn’t quite compel me as fully as the previous volumes, the thematic destination ultimately makes it well worth the journey.