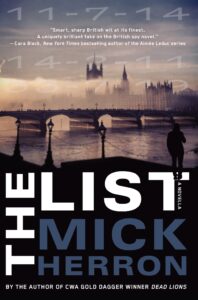 In between the major novels of the Slough House spy series, Mick Herron has also penned a handful of interstitial novellas set in the same universe. Based on the first two novels and Apple+’s superb adaptation Slow Horses, I’m definitely going full completist on Herron’s “Sloughverse,” so I tracked down the first novella. Situated between books two and three, The List (2015) is a tightly constructed tale of espionage that kicks off with hapless Regent’s Park handler John Bachelor, a low-level officer in the Assets department. Bachelor’s bureacratic role is to supervise the needs and activities of retired agents. When one of his charges, a former East German source named Dieter Hess, dies after long illness, it turns out Hess had a second, secret bank account. This draws the unwanted attention of scheming MI-5 officer Diane Taverner, who threatens Bachelor’s career prospects for not having been aware of his agent’s potential compromising activities. Desperate to save his pension, Bachelor launches an ass-covering investigation into Hess’s death that ultimately requires the insight of Slough House’s slovenly legend, Jackson Lamb.

The List is a delicious, satisfying little spy mystery that unfolds in Herron’s trademark style, mixing memorable characters with deft plotting, bickering dialogue, and witty insights into the politics and personalities of its people. Taut at just sixty-seven pages, it unfolds briskly, with just enough complexity and detail to satisfy a cerebral, precise plot, which is more or less perfect. Herron’s spy fiction is easily amongst the genre’s most compelling and addictive work, and The List only propels him further up the ranks.