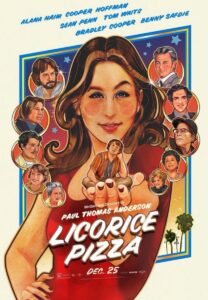 Paul Thomas Anderson’s films can be on the perverse side — almost always striking, compelling, and immersive, but often with a tendency toward overwrought indulgence. Licorice Pizza (2021) is one of his more user-friendly efforts, a period comedy with romantic undertones, set in the San Fernando Valley in the 1970s. It chronicles an unlikely relationship between confident fifteen-year-old child actor Gary Valentine (Cooper Hoffman) and mid-twenties ne’er-do-well Alana Kane (Alana Haim). While working as a photographer’s assistant on school picture day, Alana playfully endures Gary’s flattering flirtations – which surprisingly, gradually, develop into a friendship that blossoms into something of an innocent romance.

Licorice Pizza doesn’t have much of a narrative hook; it’s one of Anderson’s more specific and personal visions, drawing on his memories of growing up in the Valley. And like many of his films, it relies less on propulsive plot mechanics than on crafting and then reveling in evocative moments. The moments here are as quirky as ever, focusing first on Gary’s jet-setting acting ambitions, and later on his entrepreneurial bent, which sees him ambitiously tackling faddish enterprises like waterbed dealerships and pinball parlors. Gary’s wide-eyed hustle proves surprisingly winning to Alana, still struggling to find a direction in life, and their offbeat, inappropriate relationship leads to numerous coming-of-age adventures. While the second half is overextended and there’s only an understated payoff, the film works as an earnest, slice-of-life journey. Haim and Hoffman are raw, untraditional leads who share an unconventional chemistry, and Anderson surrounds them with great talent, including Bradley Cooper, Mary Elizabeth Ellis, Sklyer Gisondo, John Michael Higgins, Sean Penn, and Tom Waits. I don’t think it leaves a particularly deep impression, but it’s an easy film to like. 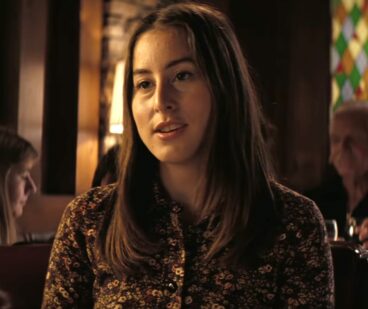