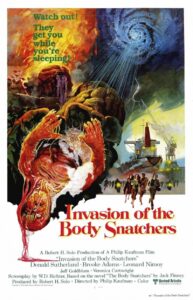 In retrospect, I should have gone back to the original, to better provide a legitimate comparison. Instead, I leave the remake of Invasion of the Body Snatchers (1978) with the vague sense of having spent two hours searching for the earlier film’s removed subtext. Set in San Francisco, this one follows the story of two Department of Health employees, Elizabeth Driscoll (Brooke Adams) and Matthew Bennell (the ubiquitous Donald Sutherland), who gradually uncover the existence of a “silent invasion” of alien life forms taking over and replacing humans. It’s Elizabeth who first senses something wrong, when her boyfriend Geoffrey (Art Hindle) becomes cold and emotionless. Initially, Matthew thinks it’s just a pychological issue, suggesting she consult noted psychiatrist Dr. David Kibner (Leonard Nimoy). But the evidence – in the form of increasingly strange behavior across the city and inexplicable scientific discoveries – gradually mounts to support her suspicions, thrusting the pair into a prolonged fight for survival.

There’s a reason Invasion of the Body Snatchers’ premise is a touchstone concept in SF. It speaks to humanity’s fear of the other, literalizing the notion of people being taken over by nefarious new entities, which stand in for any number of scary ideological stances. If I recall, the original target for critique was the Res Scare paranoia of McCarthyism, but you could easily apply a foreboding assimilation subtext to any number of distasteful isms. It seems odd to me, then, that this remake doesn’t bother to choose one. I mean, there may be a vague notion of theme here. A Stepford Wivesian aversion, perhaps, to lockstep behavioral conformity, or perhaps creeping social fears of our inability to understand the creeping mental transformations of our loved ones? But the script barely scratches a thematic surface. It rather wastes, therefore, the adept protagging of Adams and Sutherland, as well as solid performances from fellow invasion-resistors such as Veronica Cartwright and Jeff Goldblum. I suppose there are a handful of mildly creepy moments and memorable eyeball kicks worth experiencing, but not enough to mitigate the tedium of Elizabeth and Matthew’s uninteresting struggle. A background watch, at best. 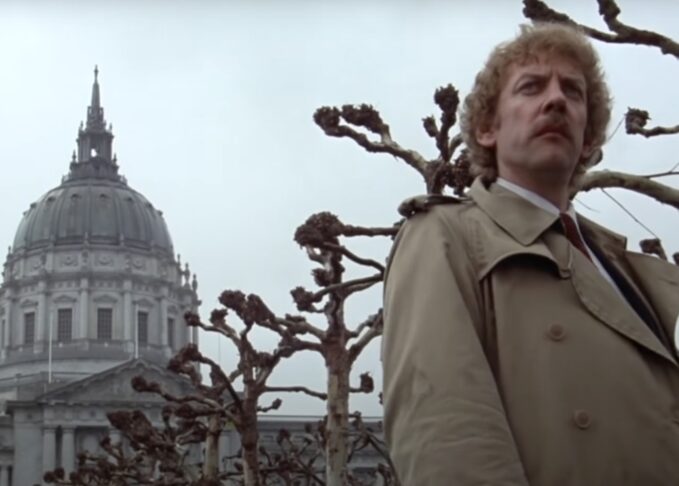 Donald Sutherland in Invasion of the Body Snatchers 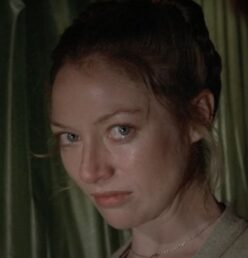 Veronica Cartwright in Invasion of the Body Snatchers 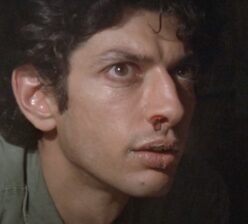 Jeff Goldblum in Invasion of the Body Snatchers 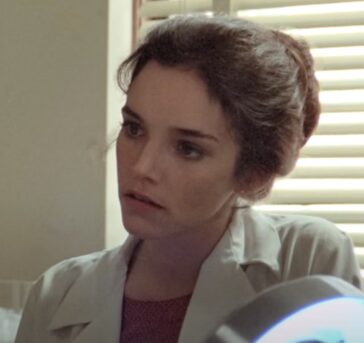 Brooke Adams in Invasion of the Body Snatchers 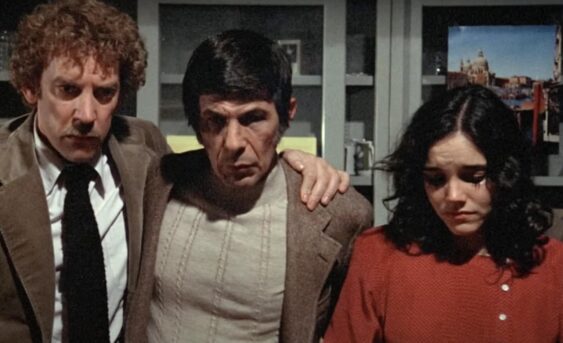 Donald Sutherland, Leonard Nimoy, and Brooke Adams in Invasion of the Body Snatchers