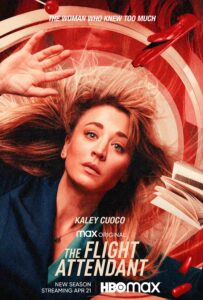 With a premise decidedly not built to last, The Flight Attendant must have generated too much buzz not to be renewed, and it recently blazed through its second season. The results are mixed, but fortunately it has an incredible star, whose commitment makes it impossible to look away. Kaley Cuoco returns as Cassie Bowden, an alcoholic, thrill-seeking flight attendant whose life spirals into chaos when a casual fling turns her into a murder suspect and involves her in an international conspiracy. Having survived these adventures, Cassie has gone into AA and moved to Los Angeles to re-invent her life – still a flight attendant, but now in a stable relationship with fellow recovering addict Marco (Santiago Cabrera). On the other hand, she’s still a danger magnet, and through a work colleague has become an unlikely asset-in-place for the CIA, using her international travel as cover for low-level surveillance assignments. On a mission in Berlin, however, everything goes horribly wrong when the man she’s watching is murdered – by a Cassie Bowden lookalike. Someone’s up to no good, and seeking to pin the blame on Cassie – but who, and why? Returning to LA, she reads in her visiting friends, disgraced lawyer Annie (Zosia Mamet) and her hacker boyfriend Max (Deniz Akdeniz), who pitch in to help her solve the mystery…and keep her alive.

There’s an elephant in season two’s room: Cassie’s wild mess of a personality makes her an extremely unlikely candidate for CIA field-agent recruitment. That improbability hangs over the show like a cloud, until you relax your disbelief. Better to allow the frantic, cartoonish contortions of the plot be what they are: a framework upon which to suspend Cassie’s emotional turmoil. Season one’s eyeball-kicky conceit – a whimsical technique of occasionally propelling Cassie into a surreal inner mindscape, where she engaged in hectic conversation with her fling-slash-murder-victim Alex (Michiel Huisman) – is repurposed here to give Cuoco an even greater opportunity to shine. This is a show that knows where its strengths lie, and as the most prominent of them, Cuoco rises to the challenge. She shifts her performance into a manic new gear as her character is put through another emotional wringer. The show also smartly ups the involvement of the winning Mamet and Akdeniz, whose neurotic support provides a decent B story – and a possible path forward for the series, should it be renewed.

On the other hand, there are problems. Once again, the plot is all over the map, perhaps less successfully so this time. A new roster, including most notably Shohreh Aghdashloo, Jessie Ennis, Cheryl Hines, Mae Martin, and Mo McRae, populates the frenetic landscape, joining  the returning T.R. Knight, Griffin Matthews, and Rosie Perez. This vast cast of characters’ integration into the story is convoluted and not always convincing, while Perez’s tertiary narrative arc isn’t especially well managed. Finally, at times the heightened-reality silliness of the surface action grates awkwardly against the intensity of Cassie’s emotional death spiral. Can one ignore these cracks and flaws? Given its many assets, including another first-rate, animated credit sequence backed by Blake Neely’s brilliant theme music, I think it’s worth the time – especially given Cuoco’s epic performance. But as a whole, the results are decidedly mixed. 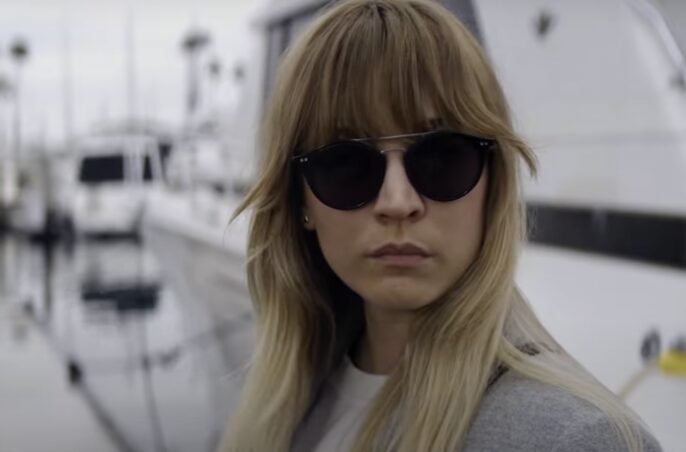 Kaley Cuoco in The Flight Attendant 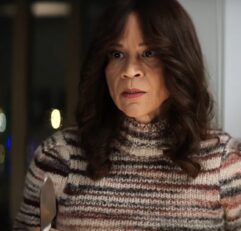 Rosie Perez in The Flight Attendant 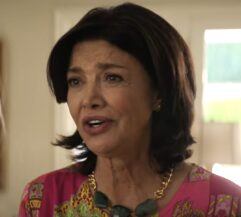 Shohreh Agdashloo in The Flight Attendant 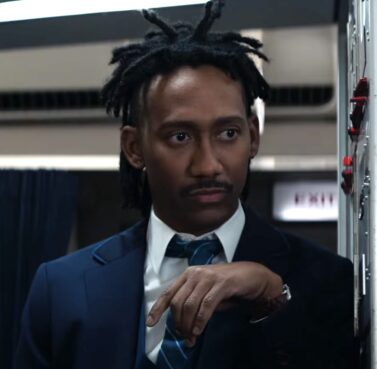 Griffin Matthews in The Flight Attendant 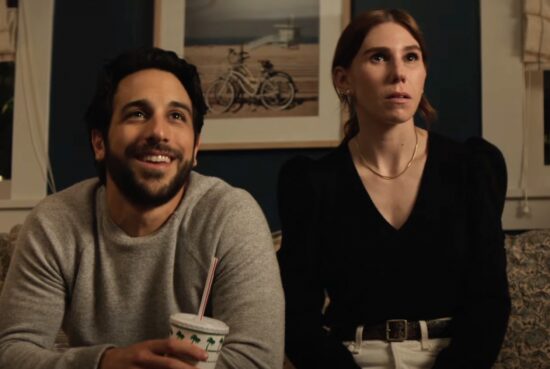 Deniz Akdeniz and Zosia Mamet in The Flight attendant