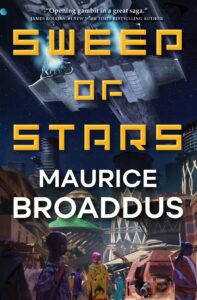 I love an inventive, close-to-home space opera with political edge–think The Expanse, or Ian McDonald’s Luna trilogy. Maurice Broaddus’s Sweep of Stars (2022) slots nicely into that niche, depicting a colonized solar system of tomorrow where various factions of humanity continue to squabble across a futuristic new landscape. Broaddus injects the scenario with an intriguing new element: a post-national community known as the Muungano, which serves as the focal point for the  wide-sweeping narrative. A coalition of Black cities and colonies across the solar system, the Muungano is an ambitious, idealistic new society which has rejected systemic injustice and broken away from Old Earth to create a fair and forward-looking new way of life. Unfortunately, this pits them against existing powers with a vested interest in maintaining the status quo. When a series of tragic incidents resolves into a pattern of treachery, the Muungano’s many leaders investigate the conspiratorial assault against them, forced to make difficult decisions in defense of their utopian dream.

Sweep of Stars has an unilluminating, rather random title, but it’s an impressive first venture into a new series. It can be a challenging read; the vast array of viewpoint characters, narrative threads, subplots, and jargony neologisms combine to fracture the narrative into an interesting but jerky mosaic. Even so, there’s no denying the wicked cool future-building, refreshingly different and full of nifty, inventive details, and Broaddus has populated the landscape and fueled the adventures nicely. The title does at least speak to the epic sprawl of the adventure, which looks to involve Muungano in perilous future conflicts. Overall I enjoyed it, a familiar genre vibe energized by a uniquely creative sociopolitical flourish.