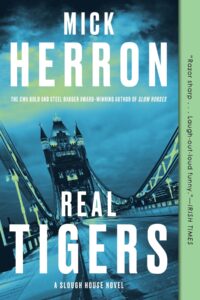 Mick Herron makes this stuff look easy. Effortlessly read, fast-paced, and funny, Real Tigers (2016) is the third full Slough House novel and it’s every bit as enthralling as the earlier books. It’s also a nice showcase for the Slow Horses’ most competent exile, Catherine Standish, the bookish right-hand woman for slovenly, crass boss Jackson Lamb. When Catherine bumps into an old service flame on the streets of London after work one night, she’s too cynical and suspicious to assume it’s a chance meeting, and immediately goes into countersurveillance mode. But before long she finds herself in hot water, a kidnapping victim whose ransom quickly embroils the rest of Slough House’s lovable losers in a race against time to save her. But Catherine’s abduction is just one layer to much more complicated scenario, which involves a scheming new Home Secretary, a posse of disaffected former security officers, and a pair of rival intelligence service bigwigs, including Lamb’s cagey nemesis Diane Taverner.

Herron spins a mesmerizing web in these shrewd, witty spy mysteries. Real Tigers is another thoroughly satisfying ensemble adventure for Lamb, Standish, and their office of fuck-ups, deeply flawed strivers whose epic underdog status has you rooting for them despite their constant mistakes and iffy peculiarities. Once again, Herron continues his nifty trick of delivering both ends of spy fiction’s classic spectrum: bracing, high-stakes action adventure on one end, penetrating, cerebral puzzle-solving on the other. And he does it all with a nod and wink that makes his work both a healthy antidote to the toxic spy fantasy of James Bond and a wry, satirical counterpoint to the weighty seriousness of John le Carré. I can’t get enough of this stuff.

Film: Crimes of the Future