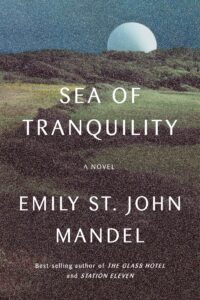 For accessible, engaging storytelling, Emily St. John Mandel’s Sea of Tranqiuility (2022) is unsurprisingly successful, a quick and effortless read. But as a deliberate, sophisticated work of speculative fiction, it leaves something to be desired. Indeed, the author’s previous two novels—Station Eleven and The Glass Hotel—were fantastical less for their genre furniture than for the transporting eloquence of their prose. With Sea of Tranquility, science fiction is executed more purposely, though, and while the results are entertaining, they’re considerably less magical.

The theme is certainly timely: via the premise of time travel, Sea of Tranquility examines our timeless obsession with the apocalyptic. It begins in 1912 with an a British expatriot’s adventures in Canada, culminating in a mysterious, inexplicable event. The story then leaps forward to the COVID-19 pandemic, then further still, to a future in which the moon has been colonized, and then to a deep future where time travel has been developed. The alinear narrative then makes an incremental return trip back to the past, where narrative connections across the various episodes are made, filling in the puzzle. Throughout, the story focuses on the sustained power of dark, end-of-the-world fatalism and its emotional weight, and in so doing interestingly attempts to find peace in our pessimistic instincts, showing how the chronic struggle against darkness can lead to a kind of unexpected light.

Like the author’s earlier novels, Sea of Tranquility reads easily and quickly, and it’s certainly engaging, especially in it early, mystique-building chapters. The story loses considerable luster for me, however, in its third section, “Last Book Tour on Earth.” Set in 2203, this sequence focuses on a sucessful Moon-born novelist named Olive Llewelyn, whose novel Marienbad has propelled her to world fame as an author. Marienbad, like St. John Mandel’s Station Eleven, involves a deadly pandemic. None of these elements are a problem, per se, and overall the sequence fits well within the novel’s tapestry of plot and theme. But the magic rather melts away under the weight of self-referential metafictional autobiography (Olive is clearly an author analog, experiencing author problems) and, at best, half-convincing future-building. St. John Mandel certainly recognizes the power and versatility of science fiction, but her handling of its street-level tropes here (time travel, the colonization of space, etc.) feels vague and unschooled. The writing-world recursiveness feels more genuine and insightful, but has a detrimental effect, demystifying the story by frequently reminding us we’re in one. Ultimately, neither of these flaws totally derailed the novel for me; Sea of Tranquility is, in its scattered way, an interesting, ambitious novel attempting something difficult. And at times, it also has intriguing, eloquent things to say. But compared to the mesmerizing sure-handedness of The Glass Hotel, this follow-up can’t help but feel a little disappointing.