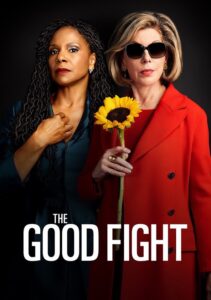 Can it be possible we’ve seen the last of Christine Baranski’s bravura turn as complex feminist lawyer Diane Lockhart? After a remarkable thirteen seasons and 216 episodes as the character—which started in 2009 with the The Good Wife and recently concluded with The Good Fight’s sixth-season finale—Baranski established herself as the chief continuity anchor for a rich, fictional legal drama universe. Her sustained performance was epic, and the character certainly hasn’t run out of potential. One could hardly blame the show’s creators, Michelle and Robert King, for wanting to turn the page after laying so much track in the Goodverse, but it’s a shame to see the end of something that’s been so good for so long. (No pun intended, but I’ll take it.)

The Good Fight initially looked like a reinvented, non-Julianna Margulies continuation of The Good Wife, but it quickly blazed a new trail for itself; indeed, in some ways the two shows feel like products of different eras. With its fast-paced, dialogue-driven ensemble and conventional legal drama rhythms, The Good Wife might be considered a late entry in the twenty-first century’s “New Golden Age.” Like most high-quality network shows of the aughts, it was frequently overlooked in favor of its more daring cable peers, but at its best it was right up there sparring for street cred with them. The Good Fight, on the other hand, is perfect Peak TV: a niche darling of the streaming wars that has served as a fierce tentpole property for the underdog CBS All Access/Paramount Plus service. It capitalized on earlier legwork by strategically plundering The Good Wife’s massive roster of memorable characters, but quickly propelled them into situations increasingly audacious, intense, and surreal. Why? Well, for a show about a passionate progressive Democrat joining a Black law firm, the timing couldn’t have been better for its debut: 2017, the year the American political world went next-level crazy. The inauguration of Donald Trump and the insidious surge of Republican extremism was enough to drive any good Hollywood liberal crazy. The Kings used their rage to fuel The Good Fight’s storytelling, and with Diane Lockhart, they had the perfect character to give their left-wing frustration voice. As world events grew increasingly surreal, so too did The Good Fight, which escalated from heightened-reality to surreality to borderline alternate reality over the course of its run.

Season six is one of the show’s strongest, and not just because it comes on the heels of the pandemic-warped, satiric cartoonishness of season five’s “People’s Court” arc. It simply makes a lot of on-point decisions about how to end such an angry, funny, necessary show. Its first, perhaps best move is an important moment of self-awareness for Diane, who gives up her named partnership to de-center her voice in a historically black firm. Perhaps it’s a case of art imitating life, the Kings’ directly acknowledging their own position as white showrunners for a series aiming to represent Black experience. But it’s also a shrewd creative decision for Diane. The chronic stress of being a left-wing activist in a country battling right-wing authoritarianism has brought her, at last, to the verge of burnout. This forces her to consider whether to keep fighting the good fight, or throw up her hands and retire into her wealthy privilege to find some kind of peace. Diane’s pivot away from professional leadership steers her into the arms of quirky doctor/therapist Lyle Betancourt (Mad Men’s John Slattery). Charismatically played by Slattery (a great casting move), Lyle is a charmer who appeals to Diane’s intellect, and tests her loyalty to perversely likeable but problematic husband Kurt (Gary Cole). Diane has long questioned her marriage to Kurt, a soft-spoken Republican ballistics expert whose politics Diane has always abhorred. Intelligent and well read, Lyle—whose experimental hallucinogen treatments also happen to bring Diane emotional relief—represents a chance for Diane to eliminate the political divide in her personal life, proving a worthy opponent to the differently charming Kurt. Will Diane stay with the dependable, iffy Kurt or seek refuge in Lyle, a like-minded member of her own tribe? Will the series end with Diane still in the thick of things, determined to continue the fight for progress, or will she call it a career and try to enjoy her golden years? Season six plays this tension perfectly, keeping Diane’s options open as she considers them, her choices—like the show—walking the line of grounded political realism and satirical flights of fancy.

Diane stepping down also makes room for a new named partner, and yet another spectacular casting decision brings us Andre Braugher as Ri’Chard Lane, a posh eccentric foisted on the firm by its corporate overlords. He quickly becomes a partner-slash-foil for remaining named partner Liz Reddick (Audra McDonald). Braugher is such a great fit for The Good Fight that when he arrives, he immediately feels as though he’s always been around; at any rate, he brings a dynamic, volatile presence to the proceedings, filling the void left by Delroy Lindo’s season-five departure.

Amidst all these great decisions is one more master stroke: the entire season takes place during a continuous, roiling, often violent protest on the streets of Chicago. The reasons for the protest are never explained; it is merely a nebulous, two-sided clash of left and right factions. While the mundane daily business of the firm continues, it’s frequently punctuated by sirens, chants, explosions, gunshots, and screams of terror from the streets below. It’s the perfect literalized metaphor for America’s internet-supercharged political strife, and The Good Fight leverages it brilliantly, reflecting on how easy it is to get inured to such madness, the constant thrum of threat mutating into numbing background noise—which still, ultimately, manages to degrade our mental health. This nicely sustained conceit propels season six to new heights of surreality, both funny and shocking, leaving the viewer to question whether the show will remain in our reality or propel us into an entirely new one.

Season six brings all these elements together impressively, culminating in a skillful, satisfying finale. But can this really be the end of the Goodverse? Well, it does tease spinoffs, casually floating numerous trial balloons. Will Diane go to DC with Marisa (Sarah Steele) to lead an all-female firm? Will Jay (Nyambi Nyambi) and Carmen (Charmaine Bingwa) dedicate themselves to “the collective,” a clandestine Black vigilante group taking political matters into their own hands, Mission: Impossible style? The Kings, who are extremely prolific, could certainly keep the Goodverse train rolling if they wanted to. But if this is the end, they deserve a raucous round of applause for so boldly confronting the ugly realities of American politics in a way that few other shows ever dared, with humor, heart, and fierce intelligence. 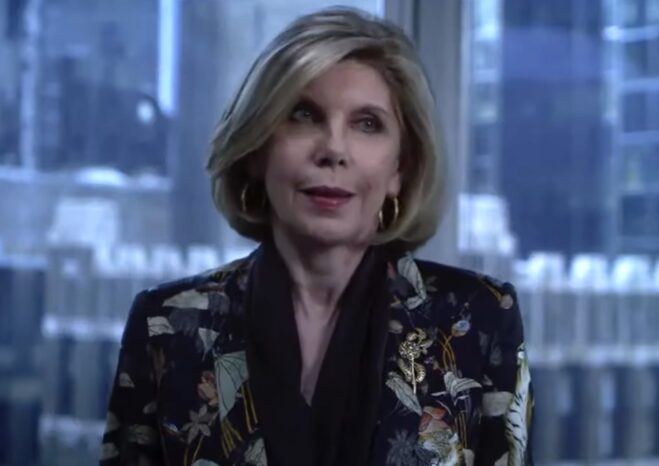 Christine Baranski in The Good Fight 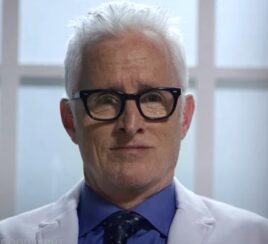 John Slattery in The Good Fight 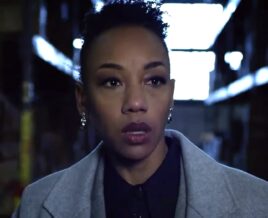 Charmaine Bingwa in The Good Fight 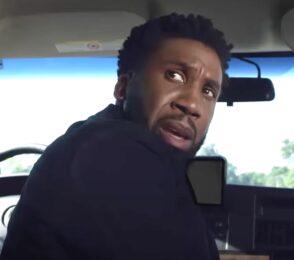 Nyambi Nyambi in The Good Fight 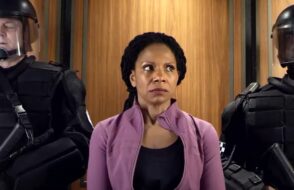 Audra McDonald in The Good Fight 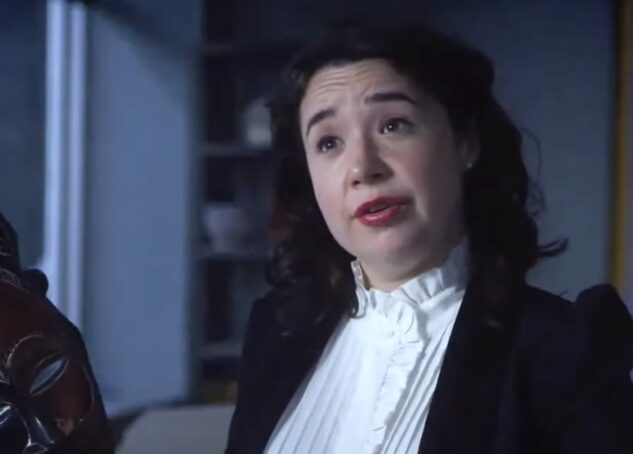 Sarah Steele in The Good Fight 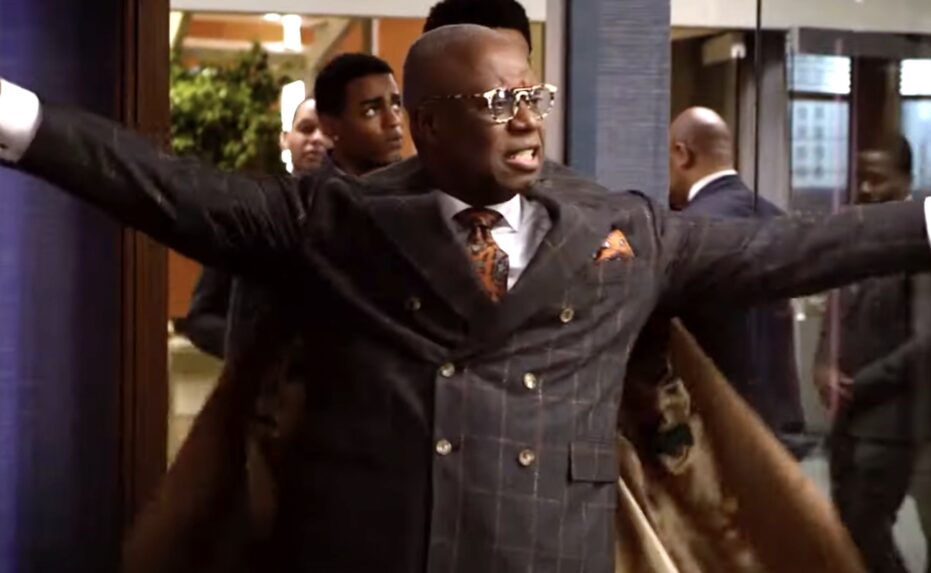 Andre Braugher in The Good Fight