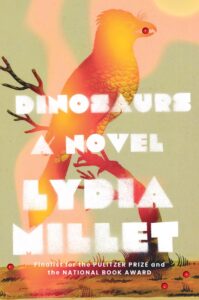 Lydia Millet is nothing if not versatile, and Dinosaurs (2022) shows her in my favorite mode: a contemporary setting, strongly integrated environmental themes, and a keen eye for gender and class dynamics. Dinosaurs follows Gil, a lonely, wealthy bachelor who randomly relocates from New York to Phoenix, Arizona in the wake of romantic heartbreak. Gil doesn’t just move, though; he buys a house off the internet, ships all his belongings, and then walks all the way, a five-month trek. On the other end, he finds himself within voyeur range of a neighboring, glass-walled house where a family of four has also recently arrived: attractive therapist Ardis, her husband Ted, and their children Clem and Tom. After awkward introductions, Gil becomes something of an adopted uncle to the family, with whom he develops a devoted relationship. Meanwhile, he wrestles with grief over his relationship, seeks appropriate targets for his ample free time, and tries to figure out how to move his life forward.

Dinosaurs is a slim, quiet book, but while it tells what appears to be a small story, it’s in fact thematically robust. Gil is a uniquely likable character: haunted, isolated, well meaning, an idly rich bachelor aware of his privilege and anxious to do right. The surface focus of his journey is around escaping beta-male introversion to connect with the world, primarily through his neighboring, created family, but Millet also weaves in elements that address the modern feeling of living in an atmosphere of constant crisis. With the time, resources, and personality to absorb the problems of the day, Gil is a uniquely empathetic protagonist who volunteers at a women’s shelter, develops a casual familiarity with bird-watching, and takes an avuncular interest in the mental health of young Tom. These interactions enable Millet to subtly explore the challenges of coping with the dread of current social, political, and environmental conflicts. As usual, she displays a keen eye for both the personal and the universal, and the result is a novel that looks outwardly unassuming, but ultimately has quietly profound things to say about navigating modern American life in this difficult moment. Another first-rate entry in Millet’s outstanding body of work.