You wouldn’t know it from reading previous year-end whinges on this blog, but I love this time of year. Sure, it’s partly because my job mercifully shuts down for the final week of December; a long vacation makes for an energizing finish line. But there’s also something clarifying about the arbitrary clock-tick of moving from one year to the next. It helps me pull back and reflect, and while that can lead to dark places–reviewing the previous year’s failures, fiascos, and frustrations–it’s always in service to pressing the reset button. Every day is a chance to reinvent yourself, but how often do we actively think about it? The approach of New Year’s Eve triggers me to do it, and the notion of change, or even just the potential for it, can often bring hope along with it.

By and large, life in 2022 felt very much like living in a batshit future my teenage self could never have predicted. In the wider world, the times still feel defined by relentless crises, which this year included coping with the aftermath of Trump and the insurrection, Russia’s horrific invasion of Ukraine, SCOTUS’s assault on women, incessant mass shootings, and a terrifying litany of extreme weather events we still haven’t wrapped our heads around as a civilization. And yes, news flash, the pandemic is still a thing—not that you would know it from how seriously it’s being taken. Being immunocompromised made me extremely cautious during 2020 and 2021, but as masks continued to come off this year, I remained 95% locked down. When I go (masked) out into the world, I remain baffled by how relaxed everyone has gotten about it, and come home wondering about my risk calculus: is it absolutely correct, or hopelessly broken? Consequently, I spend most of my time indoors, mainlining books and films and shows and stories, writing fiction or reviews, or—when my brain doesn’t feel up for any of that—mindlessly playing endless games of NHL 22 or Sniper Elite 5. But Chris, one may ask, how is that any different than your ordinary behavior? Fair point! Besides, aspects of this weird future—an instant, on-demand video store in my living room, for example—would have thrilled my younger self. But even down at the far end of the introversion spectrum where I live, 2022 felt even more isolating, especially now that so many others are reconnecting in person. That isolation has been exacerbated by my fast-fading faith in social media. The shine has been off that particular apple for years now, but this year, I considered deleting Facebook and Twitter altogether, convinced that social media—or at least, social media as it’s currently configured—is just a bad idea. (I mean, I’m thinking about Elon Musk as I write this. How fucking annoying is that?) On top of all that, we’re reckoning with inflation, the mutating economies of late-stage capitalism, and the eroding disruption of the supply chain, as our wasteful, easy-mode civilization grows increasingly less sustainable. I don’t think we’ve scratched the surface of the scope of that yet, but it’s hard not to notice the slow-burn dystopia of William Gibson’s Jackpot creeping into daily life. The future ain’t what it used to be.

On the other hand, there were hopeful signs this year, too. The world’s inexorable slide into authoritarianism was resisted in important ways, both on the ground in Ukraine and in the U.S. midterms. Legislation has been passed to help protect democracy, enshrine key human rights, and battle the climate crisis. There’s still a long way to go on every front, of course, and there are legions of right-wing sociopaths lining up to make the work more difficult. But it’s encouraging to see collective action in response to so many threats on so many fronts. And yes, while reality is often horrible, entertainment and the arts have been a godsend, especially in episodic television. It’s looking like the streaming wars may finally be sputtering out under the sheer weight of its costs, but if so, Peak TV delivered a phenomenal send-off. It was just an incredible year for scripted TV, with outstanding debuts (Andor, The Bear, The Old Man, The Resort, Severance), continuations (Barry, White Lotus), stirring final seasons (Atlanta, Better Call Saul, Better Things, The Expanse, The Good Fight, Ozark), miniseries (Station Eleven, We Own This City), revivals (Borgen: Power and Glory), and, in one case, two brilliant seasons (Slow Horses). That’s more great TV shows in a year than my formative decade, the eighties, gave me all together. A story junkie in a pandemic couldn’t have asked for better content. (And that’s after culling the list for length!)

Personally, by most metrics 2022 was a decent year. My health has been wonky, but mostly I still have it, which is no small thing. I continue to work for a company I respect that treats me well. Despite the occasionally jobby grind of it, I’m still happy in my weird, hybrid role: managing a (fantastic!) team and a file system and numerous projects, leading training initiatives, designing documents, copy editing, technical writing, and generally greasing the operational wheels. In my experience, most jobs have pleasant honeymoon periods that ultimately expire; that hasn’t been the case for me here, which makes me feel extremely lucky and grateful. Plus, our physical office enables me to safely get out of the house once or twice a week for a change of scenery. Jenn and I finally made baby steps toward resuming an in-person social life, too, mostly outdoors or in careful social circles. This included a couple of brief road trips and a writing retreat, which was a real breath of fresh air after two-plus years of online meeting fatigue. We lost our beloved Cairo, but Oslo and Finn are still delightful, furry little dudes, and overall we’re doing well here, working together to optimize our little corner of the universe. Still drumming, still playing the bass, still pursuing all the old hobbies, including a new one: obsessively designing characters on HeroForge.

And then there’s writing, that ever-fraught, roller-coaster topic, still plaguing me like an old football injury. By professional standards, 2022 was another year of…well, nothing. It was a nothing year. And everything I’m hearing suggests that publishing—between employee burnout, supply-chain problems, Amazon, and on and on—is just a shitshow. Indeed, the modest writing-career dream I grew up with seems increasingly impossible at this point, even if I were a brilliant writer. Pursuing a traditional writing career feels like banging on the door of a burning house, while the people inside are so busy fighting the fire, they can’t even hear you knocking. And your reward, if you do get in? You’re in a burning building! Yet here I am still knocking, a masochistic impulse running on the fumes of delusional lottery hope, even though there are so many more important things to worry about. It’s actually kind of crazy. And yet…you know? Story keeps me going. Despite everything, making stories is fucking fun sometimes. The business is what it is; every year, I come a little closer to coming to terms with it. No, I haven’t stopped aspiring to someday achieving a career as shitty as my successful friends! But if all these years of struggle have showed me anything, it’s that even when the results of having done the thing are disappointing, doing the thing is still important.

So, here I am, still doing the thing. I came damn close to writing an entire novel draft this year—it will clock in around 80,000 words when it’s done, and I’ve had a hell of a lot of fun with it. I also completed a novelette, submitted some stories, sent some queries, did the work. And I wrote another hundred-odd blog posts again this year, nearly 90K words of it. Which, you may ask, why even have a fucking blog these days? That’s so 2003! Well, some day I’ll write a post about this, but the main reason I do it that I simply like the work of it. Indeed, more and more, liking the work of a thing feels like the whole point, and lately I’ve been trying to recognize that and lean the fuck in. Maintaining a blog, writing stupid songs on Garage Band, tweaking character designs on HeroForge, even practicing a drum part. Doing a thing; I just want to bottle that, and divorce it from the notion of some resulting reward that will lift me up and make sense of everything. It’s an insight that makes me think, in some respects, that I’d be great at self-publishing, an option I’ve been chewing on more and more. Not because I think it would make my fortune or anything. (Self-publishing with no social media presence? Brilliant marketing strategy, dude!) But I think I would enjoy the work of it. Doing the thing for the sake of it.

Anyway, as another year comes to a close, I guess that’s where I’m at. I’m just over here, trying to stay sane, take care of myself, and do my thing. Feeling pretty luck about that, honestly, because even when life is difficult, it’s not at all a bad place to be. 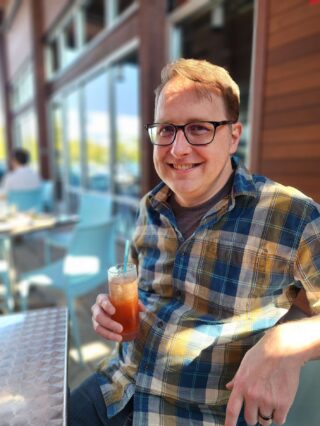 Having a cocktail on my 51st birthday 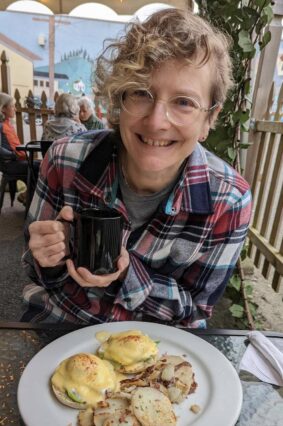 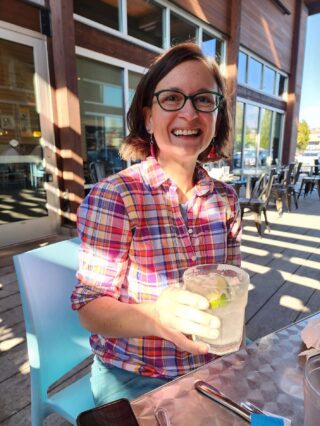 Tina, joining us for drinks on my birthday 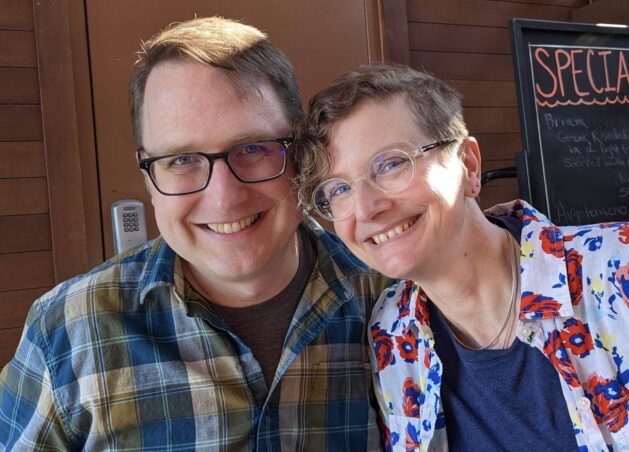 Me and Jenn on my birthday 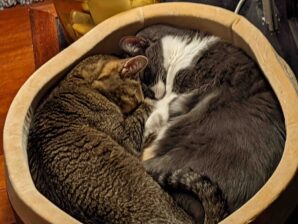 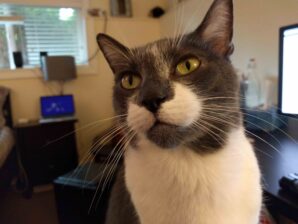 Oslo, “helping” me work in my home office 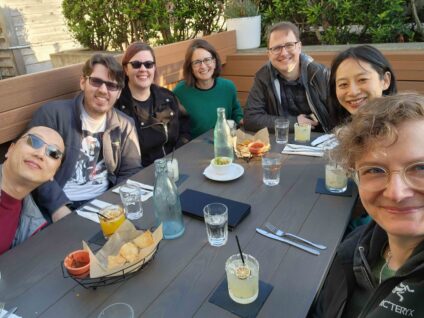 A dinner with friends (Curtis, Jason, Rachael, Tina, me, Fonda, and Jenn) 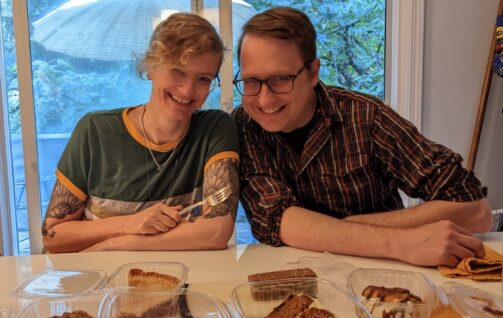 Jenn and I celebrated our anniversary with delicious local desserts