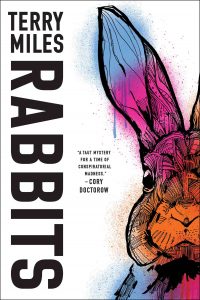 Terry Miles’ Rabbits (2021) is definitely my kind of book: a fast-paced, inventive adventure full of secret realities and conspiratorial layers, hinting at weird machinations under the surface of our mundane world. It stars K, a self-professed expert on Rabbits, an augmented reality game so cryptic and elusive that he can’t even be certain he’s playing it until the competition is deeply underway. When K is approached by the infamous Alan Scarpio, a rich businessman who won a previous iteration of Rabbits, his obsessive fascination with the game escalates into a mindbending, reality-warping adventure.

Rabbits is delightful in its details. As K and his close friend (and secret crush) Chloe work together to uncover the clues and identify the mysterious patterns of the game, it advances quickly from an exciting hypothetical exercise to a perilous, life-altering experience. Miles clearly possesses an intimacy and passion for gaming, and deploys it effusively over the rainy Seattle backdrop of the novel. Structurally, I was less impressed; a certain amount of surreal incoherence is to be expected (and even welcomed) in this kind of spec-fic mystery box, but I was hoping the scattered plot threads would ultimately come together more intricately in an inevitable-feeling reveal. Alas, the book is only semi-successful in its resolution, but the characters are likable and there’s breezy confidence to the writing that kept the journey entertaining.